The recovery of ancient Canarian recipes from the 19th and 20th centuries was the objective of the collaborative project “Historical home recipes from the Canary Islands: identity and intercultural dialogue with a woman’s name”, which is now shared as an open resource on the website recetascanarias.org.

Gastronomy is a very important component of identity and is part of the intangible heritage of humanity, and recipe books are living documents of the historical evolution of a society.

However, the focus has always been on these compilations printed over the centuries, largely by men in charge of cooking for the political and religious sphere, thus neglecting what has been the main contribution of women to this legacy. : the handwritten cookbooks for pets.

In recent years, the silent and often overlooked testimony of these cookbooks has begun to be studied.

Various Spanish Autonomous Communities have begun to research and catalog this documentation, which is becoming increasingly valuable.

The objective of this project is to map historic homemade recipes from the Canary Islands and promote their value through a freely accessible repository on the web.

In addition, this project includes research on the relationship between the Canary Islands and the outside world, as many recipes from the islands have their origins in Portuguese, Andalusian, Extremadoregian and Galician fish recipes.

Among the recipe books mapped so far are those found in the collections of Lorenzo Cáceres at the Municipal Archives of Garachico, Miguel Alzola at the Museum of the Canary Islands.

The Nepomuk Fund of the Municipal Archives of La Orotava.

Anselmo J. Benítez and Ignacio Vergara from the Old Fund of the Library of Santa Cruz de Tenerife.

Álvarez Rixo from the Guajara Library of the University of La Laguna and Alicia Ramos Wangüemert’s cookbook from the personal archive of María Victoria Hernández on the island of La Palma.

To these sources we must add the cookbooks of Carrillo Kábana, Blanca Zamorano, Rodríguez Peña and Martín de Rolo recovered from their family archives. 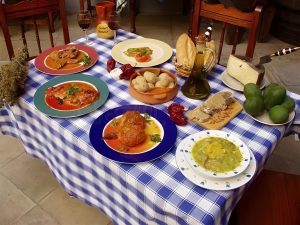 Among these recipes, which date back to the 19th and early 20th centuries, are instructions for popular sweet dishes on the islands such as huevos mole, huevos chumbos and bienmesabe.

These precious documents, mostly signed by women, contain not only recipes but also instructions on how to organize an ambigú, a festive table full of seductive dishes, or how to make orange wine, little known islanders, according to the text. , or how to stuff chorizos, an art “within the reach of all intellects”.

This project reveals the immense amount of heritage information that remains to be studied and compiled, written by women, and that is why an appeal is launched to those who have cookbooks handwritten before 1950 to make them known, to give them the importance they deserve. and to integrate them into this repository designed as a meeting place.

In this repository, which will continue to be updated in 2022, the cookbooks from which authorization has been obtained for their total or partial dissemination through recipes and other images of the archives that have requested them are offered fully and openly.

These archives represent a very relevant resource for university researchers who are beginning to take an interest in a nascent line of research in Spain but with great development in other countries such as the United States, and also a source of inspiration for cooks, broadcasters and interested parties. people in the world of Canary Island gastronomy.