In the rich program of the eleventh edition of Salto dell’Acciugthe Didactic Laboratories of “The Salt of Liguria “, who have proposed a reinterpretation of traditional dishes with recipes that combine the flavors of White Cuisine and those of the sea. In the laboratory created in collaboration with the‘Association of restaurateurs of the Paletteleader Stefania Alberti restaurant The Laigueglia stopproposed a new and original dish: I Sugeli “Salto dell’acciuga”.

The white kitchen is a particular gastronomy, which has developed along the slopes of the Maritime and Ligurian Alps. It is an expression of centuries-old agricultural and pastoral transhumance, which united the populations of the Ligurian mountains, the Cuneo region and the Occitan valleys.

It takes its name from its achromaticity because it is made up of starchy foods, dairy products, lightly colored vegetables such as potatoes, turnips, leeks, garlic or even spontaneous products harvested on transhumance paths. Despite its relative proximity to the sea, Mediterranean cuisine appears very remote: olive oil used with great parsimony and the menu was generally composed of a single dish, energetic and appetizing, which did not require long phases of preparation.

Simple and authentic dishes, reminiscent of forgotten flavors and aromas. Preparations made with exclusively indigenous products and, according to traditional production methods, which guarantee the consumer healthy and natural products while offering the territory a perspective of sustainable development and the maintenance of traditions. 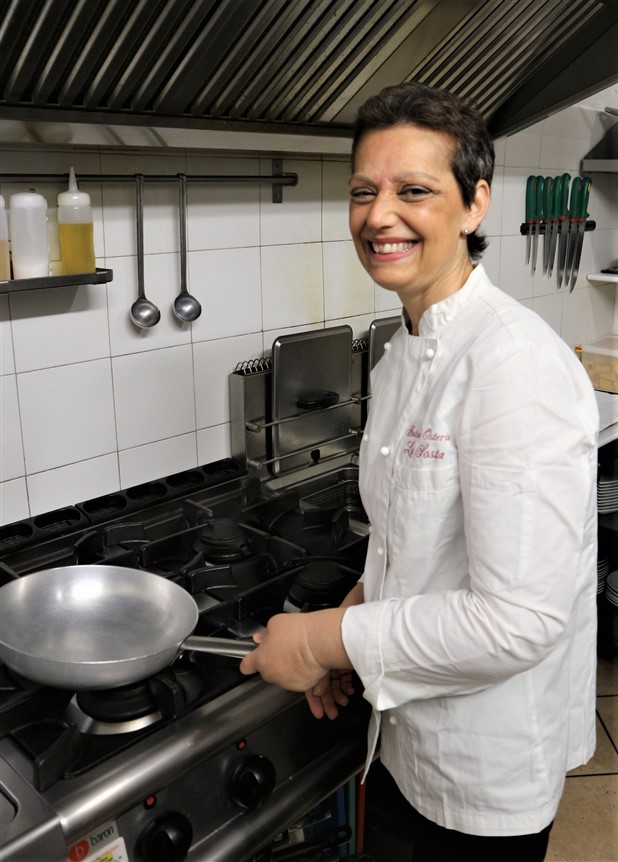 To make the show cooking dish, Stephanie was inspired by her maternal grandmother and a preparation very present in the white kitchen, so much so that it can be considered as the typical dish of the Alpes Maritimes, the Sugeli. A simple dough made with only water and flour, made into dumplings with the typical “corpu de diu” (the appearance is similar to that of orecchiette). The traditional condiment is a white sauce made from bruzzo.

For the occasion, the Sugeli were accompanied by a sauce prepared with four ingredients: fresh ricotta, sun-dried tomatoes, pitted Taggiasca olives and the queen of the party, the anchovy.

At the end of the cooking show led by the journalist Claudio Porchia, more than a hundred portions were distributed and the convinced and repeated applause addressed to the chef was the clearest proof of the public’s appreciation and the success of a dish, which knew how to combine flavors and perfumes of the sea with those of malghe.

Prepare the sugeli by mixing the flour with the oil, salt and lukewarm water until you obtain a compact but still soft dough.

Spread the strips as if making gnocchi. Then cut them into sections that you will press firmly with your thumb, passing them one by one on the pastry board.

Pit the Taggiasca olives and chop them together with the pulp.

Beat the anchovy fillets with a knife and cut the dried tomatoes into strips. Cook the sugeli in plenty of salted water for about 5 minutes.

Prepare the vinaigrette by diluting the ricotta, the anchovies with a drizzle of oil and a little cooking water in a bowl.

Drain the pasta and toss it in the bowl with the other ingredients. Finally add the chopped olives and sun-dried tomatoes.

The pasta is ready to serve.

L’Antica Osteria La Sostainserted between pallet restaurantsis located via alla Chiesa, 6 a Laigueglia (SV). The restaurant has a website and an Facebook page.