What’s better than a plate of Parmesan cheese? Gourmet, tasty, with a crispy crust and a stringy filling, the result of one of the happiest combinations of Italian cuisine: eggplant, tomatoes, mozzarella and parmesan. A timbale which consists first of frying the eggplant slices, in addition to cooking the sauce and finally the one in the oven: in short, not always easy to prepare in the hottest summers (this year can be a real challenge) , but for the parmigiana always worth turning on the oven. A timeless classic of tradition capable of conquering everyone: but why is it called that? The reason has nothing to do with the city of Parma, but with the Sicilian Parmiciana, which indicates the strips of wood that make up the shutter, this same weave that characterizes the shape of the plate. It is very probably a recipe born in Sicily, but it is to the Arabs that we owe the introduction of the vegetable to the island in the 15th century. According to some, the name could also derive from Persian Petronciana, term used to designate eggplant during the landing in Europe.

The origin of eggplant parmigiana

The idea of ​​using eggplants to create a delicious pie was probably born to imitate the Moussaka Middle East, eggplant pie, minced meat, potatoes, bechamel sauce and spices. Originally, however, the main ingredients were just eggplant and pecorino: it was the Neapolitans who then combined mozzarella, a special touch that made the dish similar to what we know today. However, not much is known about the addition of grated parmesan, but what is certain is that the first written record dates back to 1733 and is found in The gallant cook by Vincenzo Corrado, who at the time served the most important noble families of Naples, and who cites a similar recipe based on zucchini fried in lard, seasoned with parmesan and butter and finally baked. A century later, it is Ippolito Cavalcanti who talks about it in his Casarnola cuisine with the Neapolitan languagein which he writes:And you will fry the aubergines then you will arrange them in a pan layer by layer with the cheese, the basil and the stew broth or with the tomato sauce and covered you will simmer them“. 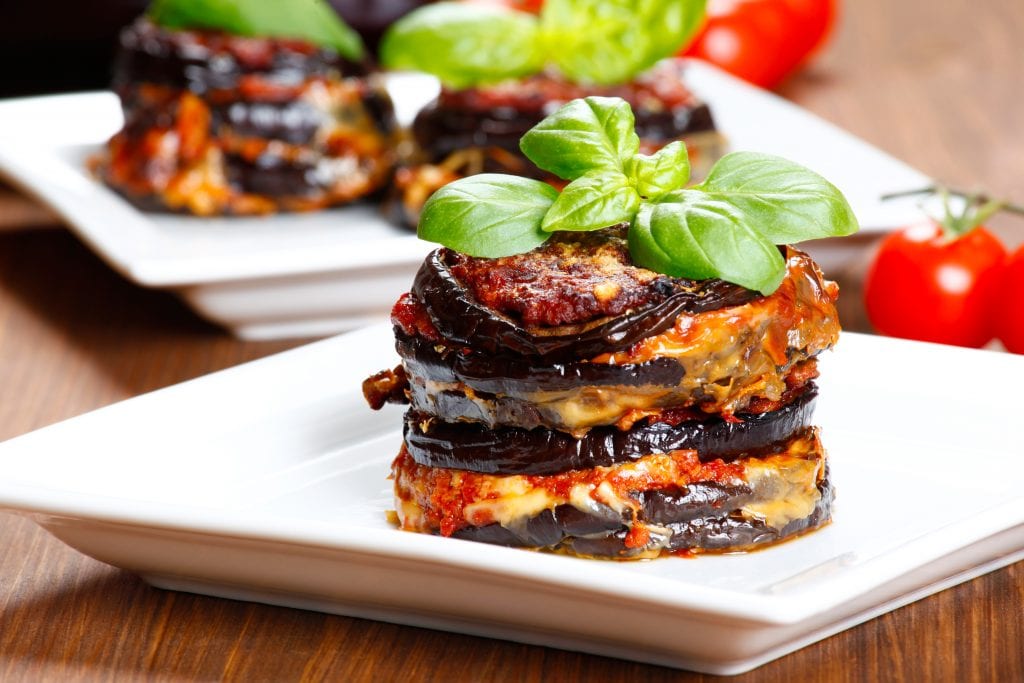 Tracing the exact origins of Parmigiana is not easy, but it appears to be a Sicilian dish, completed in Naples and made possible by the introduction of eggplant to the island by the Arabs. Recipes based on aubergines are however numerous and all tasty: but you know, parmigiana has a special place in the heart of every Italian. Its long tradition should not, however, silence the desire to renew the dish: it is possible to use other vegetables such as zucchini or thin slices of pumpkin for an autumn version, preparing it “in white” , without sauce. But you can also experiment with the same aubergines, undisputed queens of the summer: try replacing the tomato sauce with good Genovese pesto (homemade or purchased: here the ranking of the best on the market), add mozzarella, parmesan galore and you have a gourmet green parmigiana, tasty and even faster to prepare.

Cut the eggplants into slices 3-4 mm high and fry in plenty of hot oil. Drain them because they are golden brown and pat them lightly on absorbent paper. Salt them only at the end. Brown the chopped onion in a drizzle of oil, add the tomato sauce and flavor with two basil leaves. Bring to the boil, lower the heat, salt and continue cooking for 10 minutes, until the sauce is thick. Slice the mozzarella and grate the parmesan. Pour two spoonfuls of sauce into a baking dish (preferably heavy aluminum) and lay out a first layer of aubergines. On each slice place a slice of mozzarella, a little grated cheese and a pinch of pepper. Cover with more eggplant slices (you can layer or combine the slices “in a sandwich”) and pour plenty of sauce. Proceed until all the ingredients are used up, ending with the sauce and a generous pinch of parmesan. Bake at 200° for 30-40 minutes. Allow the parmesan to cool before serving.