Italian cuisine can count many recipes based on figs, from the most classic and linked to tradition, to preparations that experiment with flavors by combining the sweetness of figs with particular ingredients. This fruit arrives on our tables between the end of August and the month of September and marks in a way the end of summer.

However, September figs are not the only variety available on the market: those called “fioroni”, in fact, ripen between June and July and are a delicious speciality.

Let’s discover the best recipes with fresh figs and those based on dried figsmoreover, let’s see how to use these versatile and tasty fruits for savory preparations.

Fig recipes for all tastes

There are many recipes with figs that are part of Italian culinary tradition and beyond. THE figsactually, fresh and dried have been an ingredient for centuries important in many preparations that are the basis of the diet of the peoples of southern Europe and around the Mediterranean.

They are still used today as a garnish for main meat dishes, in combination with cold meats as an appetizer and, finally, to bake cakes and cookies of all kinds.

Fresh figs are a soft and sweet fruit, very popular with children too, whose only defect is its great perishability: it must indeed be handled with care and consumed quickly; the dry variant, on the other hand, is much less delicate and for this reason it is widely used both in cooking and in baking.

Here is a selection of recipes with simple fresh figs and quick to prepare.

Beat the veal steaks with a meat tenderizer, then flour them and cook them in hot pans with oil and butter.

Prepare the aromatic sauce based on fresh figs by heating balsamic vinegar with honey, as well as the pulp of some fruits. Pour the mixture over the meat and serve.

Preparing a fig-based ice cream without even using the ice cream maker is very simple. You need to mix 500 ml of whipped cream with 250 grams of condensed milk.

Then add the fresh fig pulp and arrange the mixture in the moulds. Place in the freezer for at least five hours and serve with the rest of the caramelized figs.

When you want a light and easy to prepare dish, a large salad is always a good idea.

To prepare it, simply wash the valerianpour it into a bowl with some wholemeal bread croutons, fresh figs cut into small pieces, some parmesan shavings and some walnuts.

Season everything with an emulsion of oil, salt, vinegar and mustard. 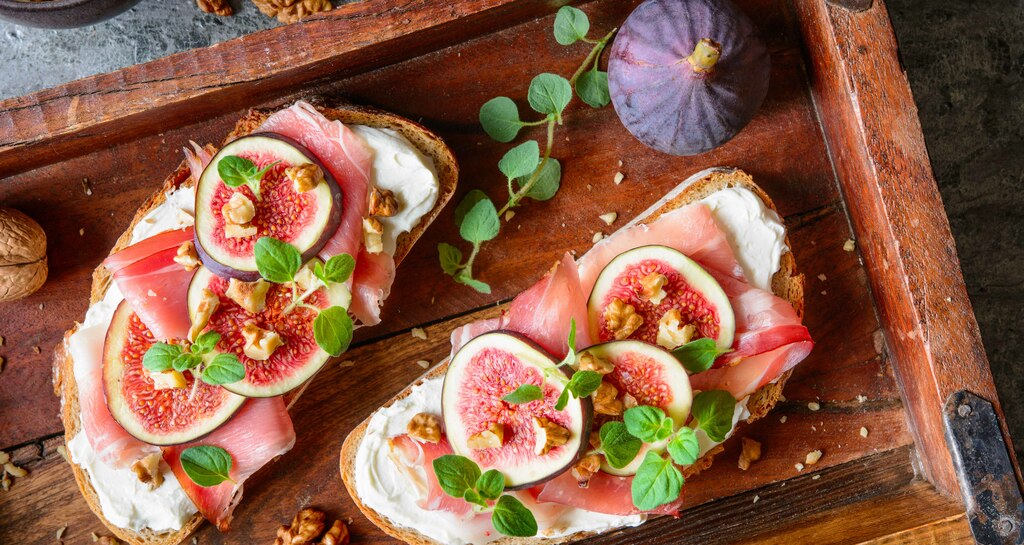 Figs, although considered one of the sweetest and most delicious fruits, give their best not only in desserts, but also in savory recipes..

One of the most typical combinations are figs with cured ham; however, a good idea is also to eat them with cheese or use them as an ingredient for risotto or pasta.

This the aperitif based on figs and cheese is really very original andat a time, easy to prepare.

In fact, just cut the figs in half and place them on a baking sheet lined with baking paper. Then, cover them with slices of fresh pecorino and bake in the oven at 180° for a few minutes, or until the cheese is melted.

The final touch is given by the decoration based on honey and pan-roasted pine nuts.

Very quick and tasty, this one the fig and speck pasta is a great starter.

To prepare it, cut the leeks into rings and cook them in a pan with cubes of speck. Then add some green figs cut into cubes and use this mixture to season the pasta.

Here is some recipes with dried figs to make at home.

This the recipe based on dried figs and chocolate is really simple, but very effective.

Indeed, all you have to do is cut a dried fig in half and place a shelled walnut in the center, then melt the chocolate in a bain-marie and finally dip the figs in the liquid. Leave to cool and finally serve.

This savory recipe made with dried figs and bacon is a delicious starter perfect for a dinner with friends.

Here is the procedure:

This simple and light dessert is prepared by mixing 400 grams of fig pulp. Add to this 150 grams of whipped ricotta with 50 grams of sugar and 50 grams of honey.

To the mixture is then added the Chinese glue (2 sheets) which will be used to give solidity to the cake. Finally, place the semifreddo in the freezer for about two hours.

Make a Fig Cake, The ingredients are :

In a bowl, beat the eggs and sugar with an electric whisk until the mixture is fluffy and foamy. Add the milk, seed oil and lemon zest, then mix well. Incorporate the flour and baking powder, mixing the mixture from bottom to top, finally add the figs cut into small pieces.

Pour the mixture into a buttered and floured cake mold and finally bake in the oven at 180° for about 30 minutes.