If you grow daffodilsthey’ll come back year after year, often increasing in number.

Unlike tulips, which are gorgeous and colourful, but far less reliable, daffodils are easy-going and spread.

Daffodils are also considered to be deer, squirrel, rodent and rabbit-proof, although old hands will say that some deer, squirrels or rabbits will eat anything.

So I have decided to plant only daffodils in the garden this autumn, and to plant all my tulips in pots instead.

And you can find out more about growing tulips here.

All the major bulb suppliers have ‘how to plant daffodils’ instructions. As they plant and grow daffodils for a living, I’d say they have the most accurate and up to date information, so I checked advice on de Jager, Bloms Bulbs, Peter Nyssen, Farmer Gracy, Sarah Raven, Crocus, Gee Tee Bulbs , Thompson & Morgan and Avon Bulbs. I’ve also looked at some of the major gardening advice sites.

What’s the difference between daffodils and narcissi?

There isn’t a difference. Daffodil is the common name and narcissus is the botanical name for the same plant.

But sometimes growers call some of them ‘daffodils’ and some ‘narcissi’ when labeling them for sale.

When you receive your daffodils…

All the specialist bulb growers said you should plant your daffodil bulbs as soon as you get them. If you can’t do that, then take them out of their plastic bags and store them somewhere cool and dark until you can plant them.

If you leave them in a plastic bag, they’re more likely to rot or grow mould.

Where can you grow daffodils?

Daffodils are happy in sun or partial shade and in a wide variety of soils. But they don’t like being really wet.

They’re very cold hardy, so can take very severe winters, down to minus 20C, minus 4F and sometimes even colder.

However, they won’t be happy in warmer countries. Daffodils grow well in the UK, Northern Europe, the Northern part of America and the southern, cooler parts of Australia, but there are fewer varieties for warmer areas like Florida.

Daffodils grow well next to deciduous trees and shrubs, because their leaves are off in the winter. But there is general agreement that they may not flower so well if very shaded by evergreen trees and shrubs. 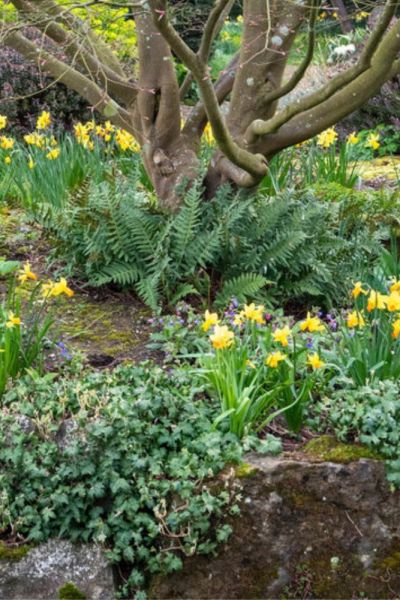 This deciduous tree in Doddington Place Gardens loses all its leaves in winter, so the emerging daffodils can enjoy the sunlight. When the leaves are back on the trees, the daffodils will already be back under ground and dormant. 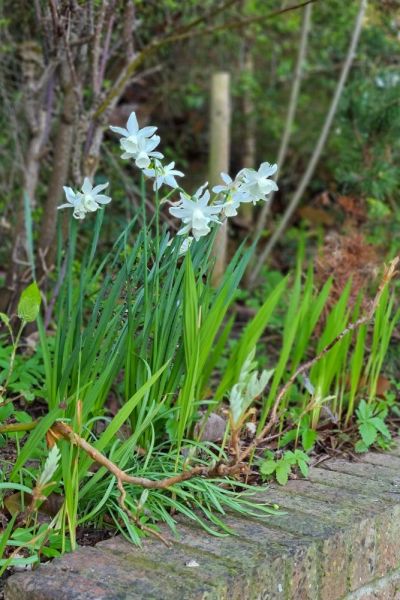 This pretty white daffodil (Narcissus ‘Thalia’) grows in my very shady border, at the edge of a canopy of an evergreen conifer. It comes back year after year. So sometimes daffodils can be more tolerant of shade than you might expect – it’s definitely worth experimenting on where you can grow daffodils. However, if your they aren’t flowering and they’re in quite deep shade, move them as that is probably the reason.

There are more ideas on where to plant spring bulbs in this post from Doddington Place Gardens.

How to plant daffodils

First, always plant daffodils (and other bulbs) with the pointy end upwards.

Most recommended that you plant daffodils between 2″/5cm and 6″/15cm apart. The RHS says plant bulbs twice their width apart. You can plant smaller bulbs closer than larger ones.

The most common recommendation was to plant daffodils about 4″/10cm apart, but experiment if you prefer the look of them a little further apart or closer together. Most daffodils will spread, so they should grow closer together with time. 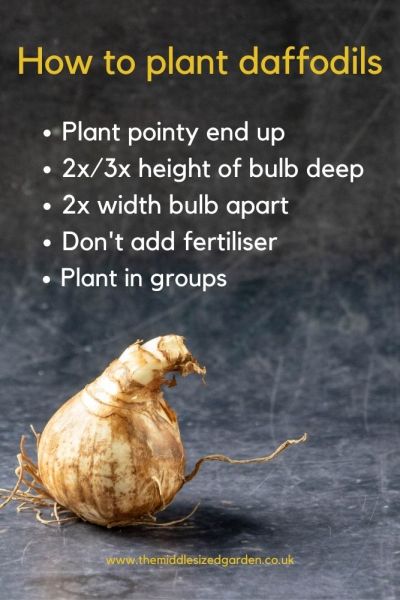 How to arrange daffodil bulbs when planting

Don’t plant daffodils in neat rows. They look best in groups in borders. If planting in grass, throw handful of bulbs lightly across and plant where they land. That looks natural.

If you’re planting in a border, dig a hole or trench so that you can plant 5.7 or 9 bulbs in one hole. Then cover them up with soil.

If you’re planting daffodils in grass, use a bulb planter because it will take a small plug of soil and grass out. You then drop the bulb in, and pop the soil and grass plug back on top.

Some people prefer planting bulbs with an auger, which is a spiral blade for a power drill. If you use power tools, then it makes bulb planting very quick.

Note that links to Amazon are affiliate, see disclosure.

When should you fertilize daffodils?

None of the specialist bulb growers recommended adding fertiliser when you actually plant daffodils, although many suggested adding compost to the planting hole or putting a layer of compost on top once the bulbs were planted.

However, you will sometimes be told to add a slow release fertiliser to the planting hole when you’re planting daffodils.

However, once the green leaves grow in spring, the bulbs start to use those stores up. They will indeed want more nutrition for next year’s bulb. However, by then, a slow release fertiliser will largely have been washed away, although some elements may remain.

Here it’s worth clarifying the difference between garden compost/mulch and fertiliser. Fertilizer is directed at a specific plant, but doesn’t improve the fertility of the soil as a whole. Garden compost and mulches, such as well rotted manure, improve the soil’s general fertility. If you add a layer to your soil at least once a year, you’ll help all your plants, not just your bulbs.

Recommendations vary on how and when to feed bulbs in the spring, but there seemed to be general agreement that a liquid seaweed or comfrey feed just before, just after or around or just after flowering will benefit the bulb. This post has more about making your own fertilizers for your garden. 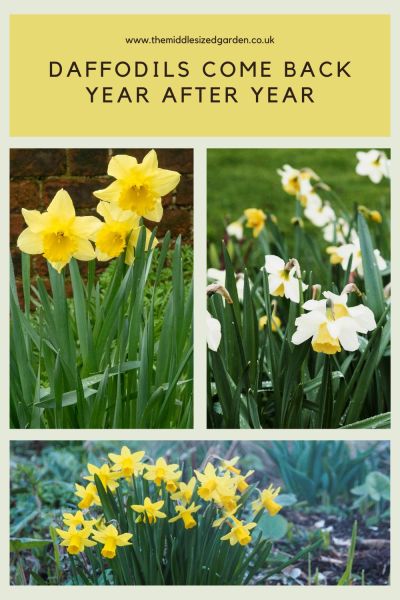 A selection of daffodils in my garden, which were all planted over 20 years ago by our predecessors. We have never fertilized them, although we do often add a layer of mulch or compost on top of the border once a year in autumn.

But you don’t always have to use fertiliser when you grow daffodils. Many people just leave their daffodils to get on with it. The flowers continue to come up year after year. So I think fertilizing daffodils is probably for those who really want to maximize their flowering

Do you need to water daffodils over the winter?

When you plant daffodils, most growers recommended watering the area once you’ve covered up them up with soil. But all say that there’s no need for further watering over the winter.

However, once the green leaves emerge in spring, some sites recommend watering, if the weather is unusually dry. Last spring was very dry here in South East England. I didn’t water my daffodils, and they were fine, but many tulips came out much shorter and smaller than expected.

The bulbs I watered were all taller and bigger than the ones I didn’t water.

All emphasized that too much water can cause daffodils to rot. Daffodils are resilient, easy going flowers and will usually carry on flowering no matter what you do or don’t do, but they will rot in very damp soil.

The number one after care tip for daffodils

Every single gardening expert I have ever come across emphasizes that you must leave daffodil leaves for around six weeks after the plant has flowered. Even if they have started to go a little yellow, leave them until they have died back completely.

As the daffodil leaves die back, other plants in the garden will be emerging, so it shouldn’t look too bad.

Why aren’t my daffodils flowering?

The two main reasons are that they have been planted too shallow or that they don’t get enough sun, according to all the bulb growers.

And if you cut the leaves off early last year, then that can prevent them flowering this year.

Sometimes daffodils ‘go blind’ and don’t flower at all. There are various remedies suggested for this, but many gardeners I know say that they don’t often work. You’d be better off digging them up, throwing them away and planting new daffodils.

Pin to remember how to grow daffodils 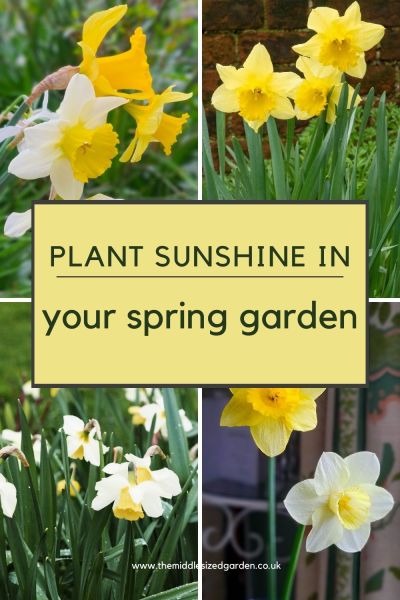