“Jewish cuisine: a cultural journey through recipes“. The initiative organized by Istoreco at the synagogue in via dell’Aquila in the city was very interesting. After the introduction of Simonetta Giliolithe public listened to the lectio of Professor Flavia Rossispecialist in the Jewish world, former professor at the Liceo Scientifico Moro, on a subject which is only apparently culinary.
In fact, the title of the initiative fits perfectly: Rossi masterfully explained the “culture” behind every traditional recipe from the Jewish world.

“Jewish cuisine is family, stability and even nostalgia – underlined the scholar at the opening of the lectio-. It’s much more than a dish: it’s a menu steeped in ancient traditions that never fade. The same objects used in the kitchen are sometimes left on display, such as a mortar, as they serve as reminders of a family’s nostalgic past.
“If you think about all the limitations placed on Jewish cuisine, it’s strange that it can be so varied,” Rossi pointed out.

The cuisine is transmitted and brought by the Jews in their wanderings, adapting according to the country, but there is a base which is common to all. It should not be forgotten that the Diaspora brought Jewish communities all over the world and not always in the countries where they stopped there were all the necessary ingredients for a certain type of recipe available. Just think of the “fried fish“, A fish with certain characteristics stuffed with herbs: traditionally it must be a carp or a pike, but in Alaska it is a type of fish that does not exist, so the Jewish communities settled in this territory replace it with salmon .

As for the limits of Jewish cuisine, they must be “kosher”, That is, to respect the laws of Jewish nutrition (kasherut) which derive from the Bible and are detailed in the Talmund (one of the sacred texts of Judaism) which, together with other codes of Jewish traditions , is considered the transmission of the Torah.
For Jewish culture “Food is not only what you eat, but what it makes you become”, explained prof. Rossi. “Kosher shows what you can eat and what you can’t. Kosher is everywhere, in any part of the world, and it means “pure”, uncontaminated, therefore fit to eat”.
Among the cardinal principles is the clear separation between dairy products and meat (“do not cook the kid in mother’s milk”).
A total of 42 animals are allowed: hoofed ruminants, cows, calves, sheep, goats, pigs, rabbits, camels or horses are prohibited. Almost all birds are allowed (except raptors), chicken, in particular, is widely used.* The meat must be thoroughly washed and dried so that not even a drop of blood remains, an element that represents life. Fish should have fins and scales that are well separable, so crustaceans and molluscs are excluded.
All other foods are “parèves”, that is to say neutral, neutral and can accompany any dish: bread, fruit, vegetables, pasta, cereals, nuts, beans, legumes and vegetable oils, as well as beverages such as soft drinks, coffee and tea.

Jewish cuisine is often marked by the times of the Jewish calendar.
For reasons of time, Professor Flavia Rossi illustrated the main ones: the The Jewish New Year: you eat a lot of sweets (to wish a sweet year), broth (the color gold wishes luck) and white foods (they bring purity). The Jewish New Year ends with a day of eating only bread and water, then recuperating as normal.

The Feast of Tabernacles is one of the most important holidays and in Israel it lasts seven days: a hut is built in the garden or even inside the house, made of flowers and fruits, and for seven days we eat only under the hut including seasonal foods, savory cakes and strudel. It is the festival that recalls the life of the people of Israel in the desert during their journey to the promised land, when they built themselves a fragile dwelling by living in huts (sukot).

festival of lights: recalls the victory over the Seleucids and the purification of the Temple. It is celebrated for eight days with the lighting of a special always-burning lamp. Typical for this occasion are potato, onion and flour pancakes or Blintzes, a kind of cheese pancakes fried with olive oil.

The new year of trees: falls between January and February. Considering that the taxes on the product were paid after the harvest, the feast represented a kind of thanksgiving for the fertility of the land of the year and the occasion to wish for a better harvest for the following year. Fruits and vegetables are eaten in ascending order, with the last fruit being cedar which is considered the best.
Even for those who are not Jewish, the holiday can be a starting point to reflect on the importance of nature and the obligation to respect it, remembering that in Italy National Arbor Day is celebrated November 21.

The jewish carnival (Purim): Usually falls in March, there are no limits, not even when it comes to alcoholic beverages.

Seder: stands for “command”. It is the culminating moment of Passover during which a great place is given to children, in particular by giving them answers to the curious questions typical of childhood: for adult Jews, it also becomes a “review” of their values.
During this holiday, boiled eggs and bitter herbs are often eaten (the bitter herb is reminiscent of the bitterness suffered by the Jews during the reign of the pharaoh). A traditional dish typical of this festival is the “charoset”, a mixture of fresh and dried fruits reminiscent of the clay with which the bricks were made in Egypt during the miraculous release of the Jews from Egyptian slavery.

Shavuot holiday or “feast of the passage, of Pentecost”: celebrates the revelation of God on Mount Sinai, where he gave the Torah to the Jewish people. It is linked to the first fruits of the harvest. Lots of dairy, milk and coconut products are consumed.

At the end of the conference in the synagogue, a long table was set up along via dell’Aquila to welcome the participants. The menu, prepared by the Cucine Clandestine restaurant, is strictly Jewish. 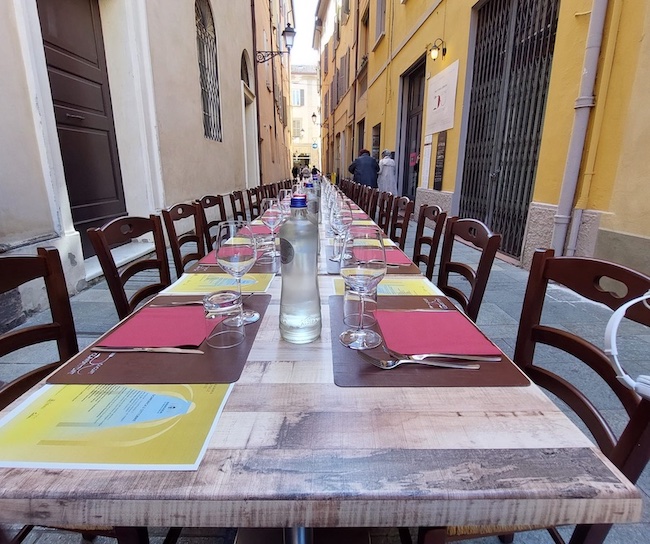