Luciano Monosilio has splurged a lot during his career. The last? The return to gastronomy in style. The new restaurant run by the Roman chef opens in Rome Follie in the splendid Villa Agrippina Grand Melià al Gianicolo in Rome, now owned by the Spanish company Melià Hotels International.

We are talking about a chain of more than 400 hotels and large luxury hotels where you can find relaxation and cuisine entrusted to the skilled hands of the best in the place, just think that in the kitchens of other large hotels in the world there there are names like Ángel León and the Torres brothers. The choice of the chef of the Villa Agrippina Grand Melià restaurant fell on the person most suited to this project: “For Rome, the company had thought of a Roman chef who had an important background, well anchored in the territory”, recount Luciano Monosilio, “So they contacted me and I decided to do this madness by getting back to doing something that I hadn’t given up, but only put aside.” For those who don’t know him, Monosilio is the boss of Luciano – Italian cuisine, a project closer to a trattoria than a gastronomy, as well as the architect of the redevelopment of the historic Piazza del Teatro di Pompeo, adjacent to his restaurant. Today the chef returns to his origins, those he practiced for years with Fulvio Pierangelini, Enrico Crippa, Mauro Uliassi and alongside Alessandro Pipero (a partnership that ended precisely to pursue his dream of single player). “Now I have a different maturity than 12 years ago. It gives you the opportunity to focus, to get back to doing what you knew how to do but in a more conscious way”.

The Follie restaurant: art and history between walls and furniture

Follie entered (kindly) with a right foot in the history of the Roman Empire, so much so that the villa which shelters it was the residence of Agrippina. In a 25-seat room (these will increase over the months due to the reorganization of the spaces), wood reigns supreme in all the furniture, with shelves up to the ceiling to house architectural books in the display case and design, and the gilding of the tables (without tablecloths) is associated with the red velvet sofas that surround the entire room, to testify to the height of the place, superb and grandiose in the image of the Roman Empire. To complete the picture, the fantastic candelabra that diffuse a soft light that makes a place warm, and at the same time, majestic that already breathes its own history. “The restaurant that was there before was called Ossimoro” said Monosilio. “We extrapolated the meanings of the word oxymoron and came out ‘crazy’ and ‘cautious'”. The stage for the decision of the name was therefore short: “We decided to call it Follie also because of the presence of a different character inside”. 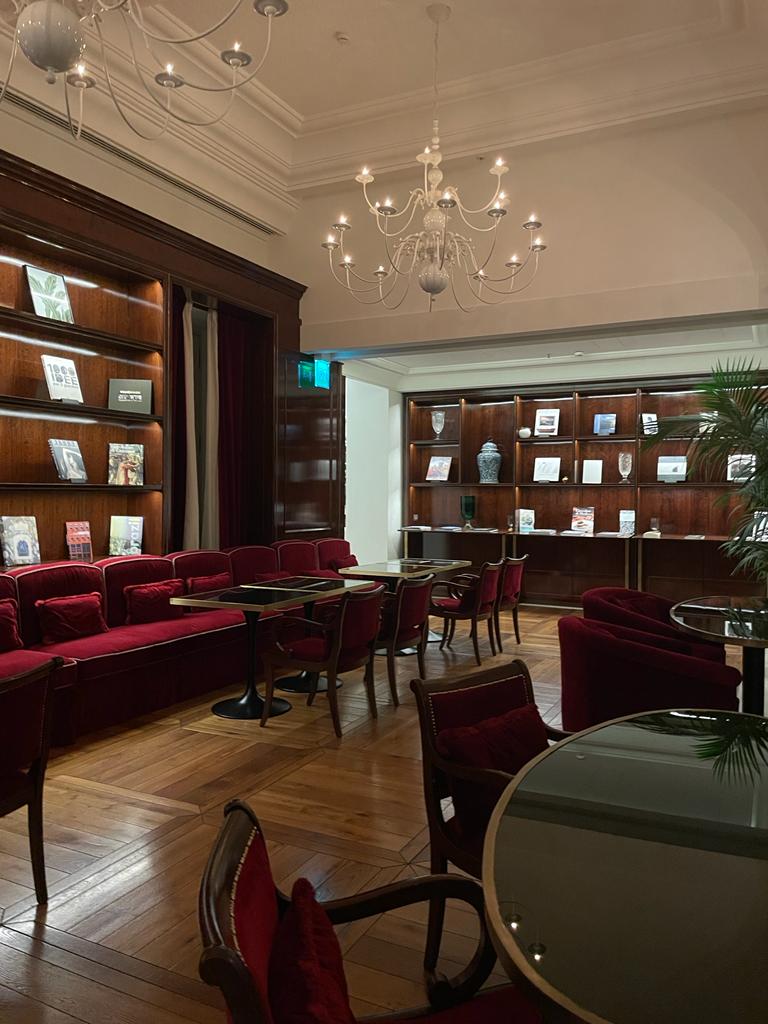 What you eat at Follie

From Follie the menu “It was designed to fit into this place”, explains Monosilio. À la carte menu but also two tasting proposals in 5 courses – 100 euros – (4 glasses of wine in combination) in which you can taste the chef’s creations as well as Raw goose, apple and mustard, Smoked lamb, raspberries and oyster emulsion, Cheese, pears and nuts; and 10 lessons (150 euros: price subject to change) to let yourself be blindly surprised. The intention is to keep the name of the Italian tradition high, bringing it back to a modern key as Monosilio knows how to do. “Italian cuisine is a tradition based on flavors. We have palatine memories, but we don’t have written and coded recipes. It is more the flavor that identifies the recipe, rather than the written and transmitted text”. And what makes tradition is therefore the flavor and not the form. So much so that we find practical returns on his plate Pizza Margarita which has all the flavors of a pizza, but it’s essentially a ravioli filled with tomato cream. “I call it Pizza Margherita because it’s a memory of flavors. One day I had these big ravioli and I didn’t know what to do with them. At that point, I grabbed it on one side, tasted it, and thought the taste was just pizza. From there I worked on it and this dish came out” which has, in effect, the flavor of a whole pizza with basil (in emulsion), buffalo mozzarella and tomato. 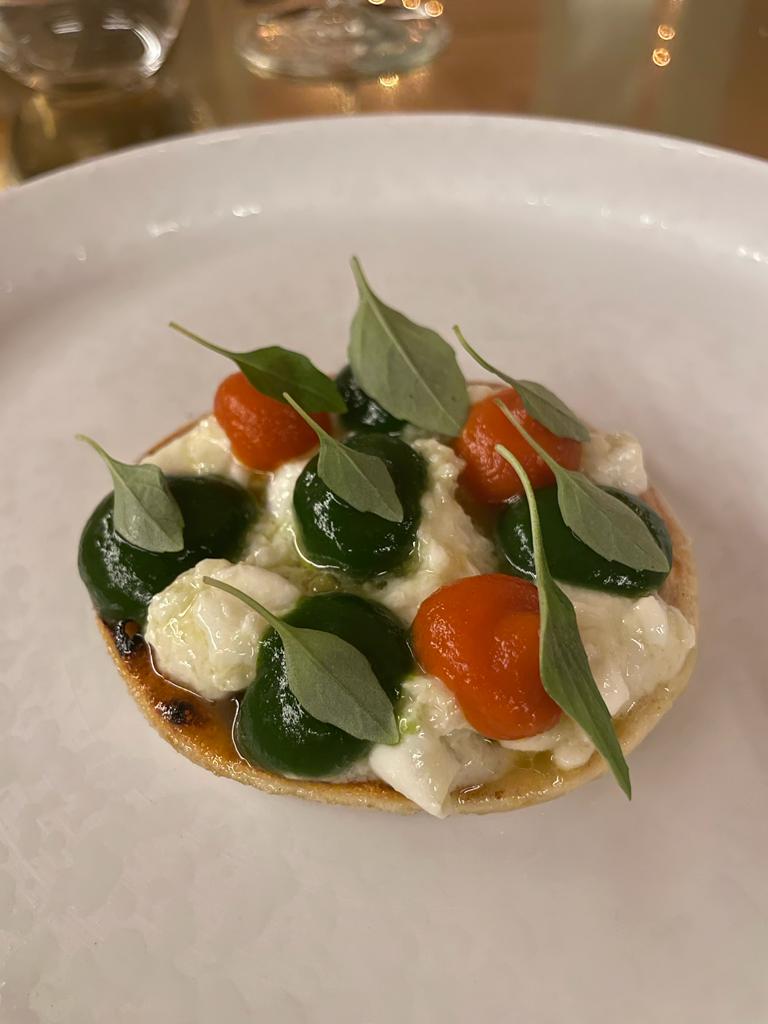 Smokers of a full sense

In the 10-course menu, Monosilio-inspired creations that – thanks to ingredients selected from local suppliers such as Marengo beef, Pecorino di Viterbo and aromatic herbs from Castelli Romani grown in hydroponics – go through strong flavors even wild, and smoking . It was not enough for the chef to combine his inclinations for roasting, grilling, with those of the place: Follie is located in a place formerly used as a cigar club. This also explains the preponderance of wood in furniture. And the smoky flavor, never anachronistic and always well centered in all the dishes, you will find it in Leek variations in perspectivea unique dish that has as its main ingredient leeks cooked at low temperature then pan-fried, acidified with apple cider vinegar and covered, then, with a leek emulsion and oven-dried leek leaves, almost charred, then grated . 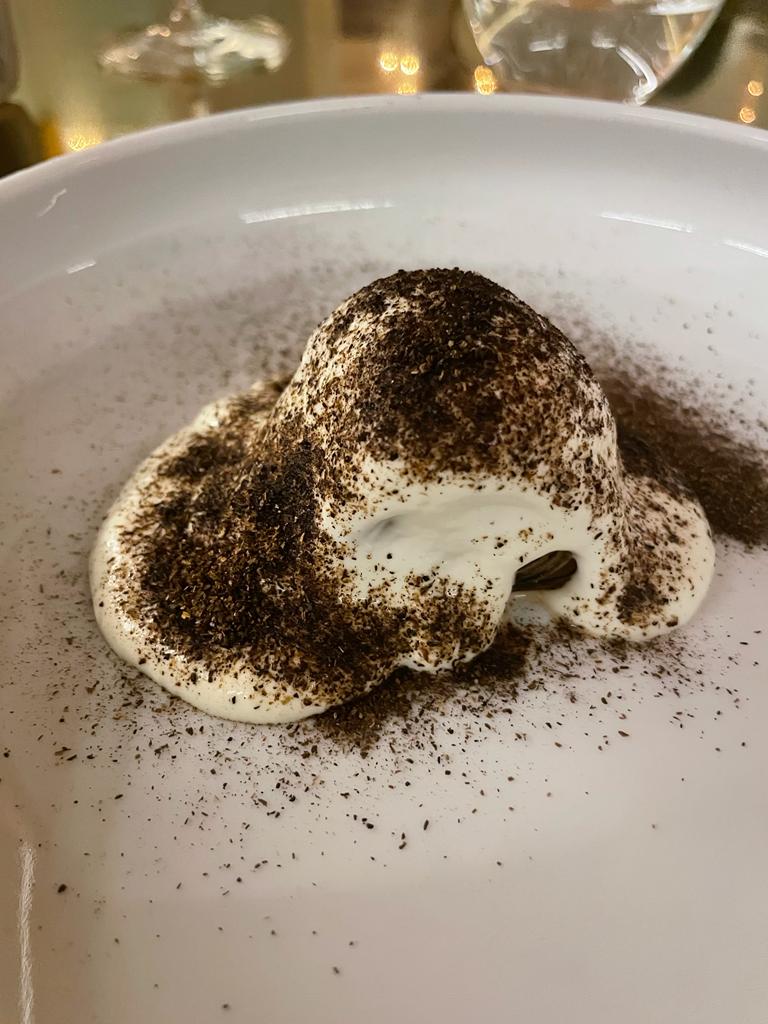 Or in theLapsang Souchong tea egg with mixed salad, raspberry vinegar and coratella bottarga where the smoking is given by the tea in which the egg is marinated which goes well with the coratelle bottarga made on site by Monosilio with a procedure that takes a few days (5 days in brine then drying for 12 hours at 45 degrees). The grilled element is then found in the bottoms, like that of Pigeon, carrots, pineapple and saffron (40 euros) or in the roasted pepper extract which will season the Kamut strips with lemon, miso egg and fresh chicory leaves (35 euros). And for the nostalgic, don’t panic: the menu does not miss Luciano Monosilio’s Carbonara. 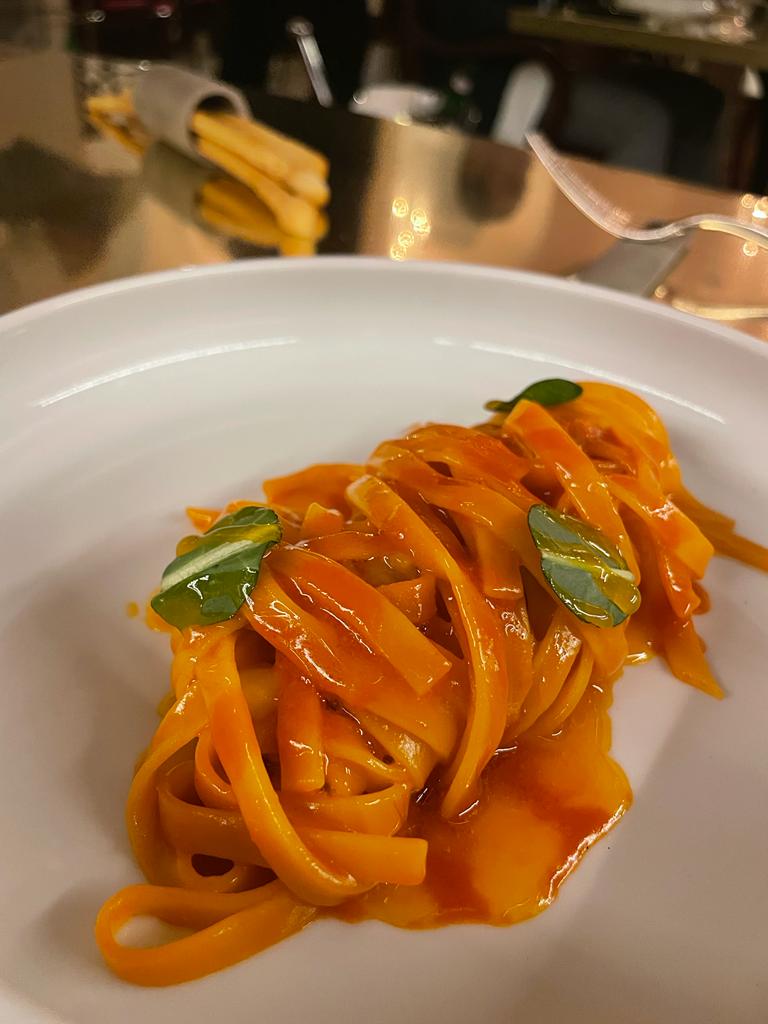 The team and the cellar of the Follie restaurant

To support the chef, a great team of professionals who, at the height of their careers, have embraced a project that already promises to be grandiose. In the dining room, the restaurant manager Francesco Minotti, Sergio Frasca is the catering manager; the bar manager did the honors at the “Amaro” cocktail bar, also owned by Spain Daniele Valeri. The cellar already houses more than 400 labels and the project also foresees, in the future, an exhibition space in the immediate vicinity of the chef’s table in front of the kitchen.

The Follie project does not stop there. The concept of cuisine and art come together in a further development: the Villa that once belonged to Agrippina will live again in the modern memories of a Spanish artist (the name still remains top secret) who will bring his works contaminated with colors and Follie story. The artist will create canvases through the use of artificial colors combined with organic dyes obtained from the preparations (mainly waste) of Luciano Monosilio. A combination of cuisine and art that tell the Follie project in its entirety, that is, the history, the art and the cuisine with the service of a clientele that loves gastronomy, appreciates art and value history.