A quirky and somewhat strange name “Pan Dei Morti” but which means a candy with a long tradition linked to the Lombardy region.

These spicy, moist and easy-to-make biscuits are prepared in various regions of northern Italy on the occasion of the Day of the Dead, November 1, and to celebrate All Saints’ Day, November 2.

The recipe can be prepared in several versions, as far as there are local tastes and gastronomic cultures, with some differences in the dough and in the shape which, typically, is long and oval, slightly flattened.

But above all, there is no single version of this dessert, because at the time it was used to mix all the leftovers to prepare
the bread of the dead.

Let’s see what the recipe provides, what are the ingredients and the preparation to obtain the most classic version of Pan dei morti, revisited in the gluten-free variant.

Bread of the dead recipe

Once this dessert is prepared with leftover cookies. Today we can still use this method to throw away and not waste food.

But if we wanted to “show off” and vary according to versions and tastes, we could also use different types of biscuits, including amaretti and ladyfingers, in order to obtain a much richer and more complex flavor from a point aromatic view.

Some ingredients that come up in the preparation of pan dei morti: almonds, dried figs, pine nuts, raisins, rum, cocoa, powdered sugar. While the others
they can be replaced in case you want to make one gluten-free version.

In a bowl with enough water, we soak the raisins for about 10 minutes. After this time, we empty it to deprive it of the water it has absorbed and we leave it aside.

In the blender, chop the hazelnuts and almonds (you can also add pine nuts), but without reducing them to fine flour. Leave them grainy. As an alternative to the blender, dried fruit can also be cut into small pieces using a knife.

Then sift the bitter cocoa powder, type “00” flour, sugar, vanilla baking powder and a spoonful of Saporita (alternatively the individual spices), a pinch of vanilla extract (powder) or even l ‘vanilla flavoring.

In another bowl, beat two egg whites with a fork for about two minutes and add a pinch of salt. Once the frothy mixture is obtained, it is poured into the bowl where all the other ingredients are. Finally, let’s add Vin Santo or any other fortified wine.

It’s time to have a finger in the pie, literally. At first we do it inside the bowl also with a spatula, when we see that a grainy mixture has formed we transfer it to the kneading table (or pastry board), continuing with the hands to mix the ingredients well.

Have the block of homogeneous structure and dark color, with small pieces of dried fruit inside, we finish the work with a last dusting of flour. And the dough is ready.

We crush it lightly with our hands and cut the necessary amount of dough to obtain the elongated and pointed cookies, about 1.50 cm thick. If we want to stick to tradition, it has to be rather big cookies, gods big cookies.

Arrange the biscuits, well spaced out, on a sheet of parchment paper, and place them in a preheated oven at 180°C, letting them cook for about 20-25 minutes.

At the end of cooking, after they have cooled a little, sprinkle a little icing sugar.

The texture of the biscuit will be soft.

A precaution: to give the best, the bread of the dead must cool a little (about 10 minutes after taking it out of the oven), and still lukewarm it must be left to rest, covered, for at least two days. In order to maintain the ideal humidity and release all the best aroma of the ingredients and spices.

NB: There are several local variations of this recipe to experiment with according to taste.

If we wanted to unleash all the creativity we have in store for the occasion, we could also do a few themed cookie shapes. 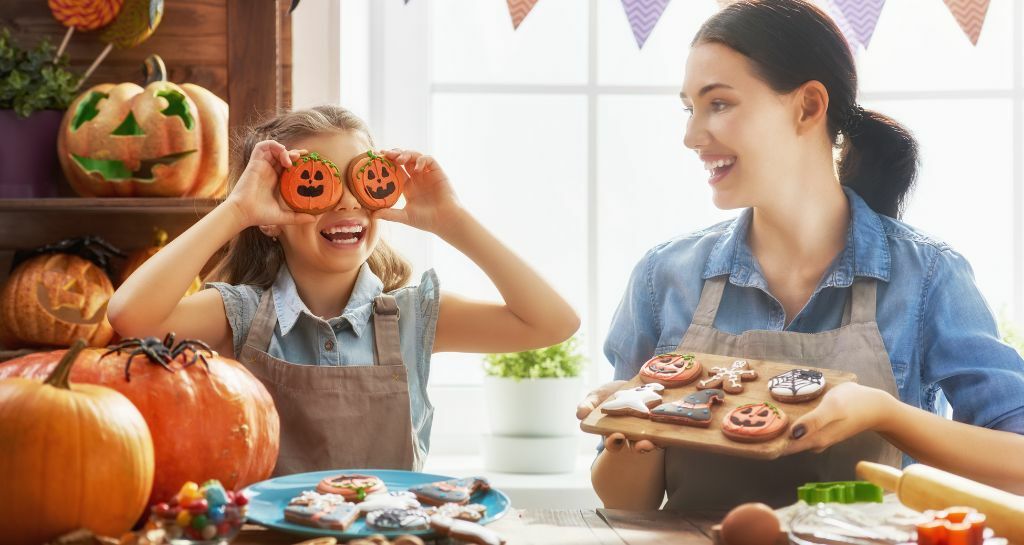 Halloween is celebrated on the evening of October 31, a pagan rite that has very ancient Irish origins. Halloween actually coincides with the Celtic New Year, Samhain, and the name derives from “All Hallow’s Eve”. The tradition then also migrated to the United States, where today it is deeply felt and celebrated with typical rituals.

And even here, in Italy, Halloween is now a birthday celebrated also with the traditional pumpkin dishes and with me regional sweetslike the bread of the dead and the fave dei morti, another typical recipe from central Italy, very easy to prepare.

Do gluten-free dessertsthere are many types of gluten-free flour which can replace the classic: rice flour, corn flour and tapioca flour.

As for dry biscuits, you can use buckwheat biscuits and gluten-free ladyfingers, available in specialized stores. Alternatively, they can also be made at home with eggs, sugar, and cornstarch.

The origins of Bread of the Dead

The bread of the dead is a dessert that comes from afar. At one time, it was given to poor families upon the death of a deceased loved one. Then it became the sweet symbol of
commemoration of the dead, prepared precisely on the days of November 1 and 2.