After seven years, Italy returns to win the couscous world in San Vito Lo Capo in the province of Trapani, five declarations in total, the last one dating from 2015. Thanks to Pierpaolo Ferracutifrom the Marche region of Porto San Giorgio nel Fermano, owner of several realities, the starry one Background the most famous.

Saturday September 24, Ferracutialready winner the previous weekend of the Italian championship, he faced in the final Shadi Hasbun from Palestine, good at making rich falafel in three different sauces. The blue, meanwhile, focused on the memory of a panzanella that gave a nod to the Mediterranean with prawns and gazpacho.

Comparison with an outcome uncertain to the point that the verdict of the technical jury, formed by Fiammetta Fadda, Chiara Maci, Enzo Vizzari And Paolo Marchi, was absolutely tied: 9 points each. The popular jury, made up of around 120 people, was therefore decisive: 9.37 for Palestine, 9.44 for Italy. The motivation: “Italy wins an edition of Couscous Festival shot as rarely before, almost a parity between an excellent interpretation of Arabic tradition and the elegance of tricolor creativity. To Pierpaolo Ferracuti credit for bringing a popular dish into the haute cuisine category.

Memory of a panzanellarecipe for the winning dish of edition number 25 of Couscous Festival 2022 in San Vito Lo Capo in Sicily, province of Trapani.

Method: it starts with the preparation of the panzanella, starting with cutting the yellow tomatoes in 2. Then cut all the vegetable components and fruits in a salad bowl in the form of cubes, add stale bread in pieces, a sprig of coriander, a sprig of basil, season with olive oil, salt, wine vinegar. Let stand 1 hour. 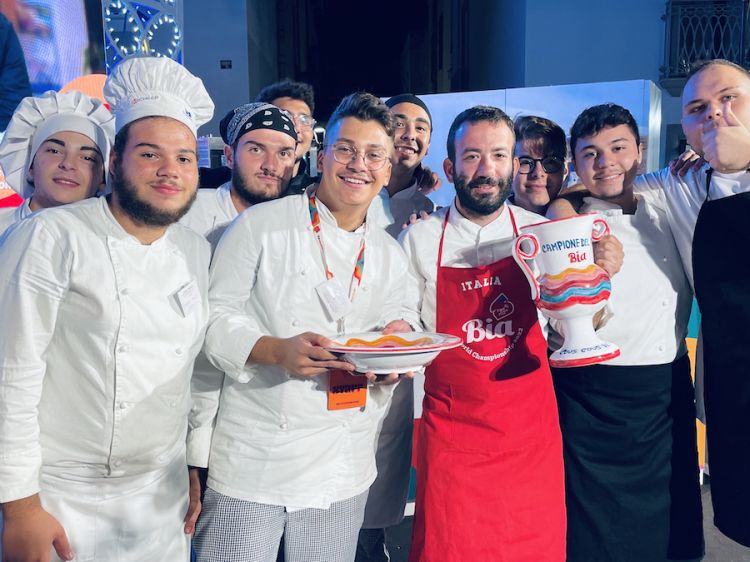 We prepare the flavored oils, first the basil one, then the coriander one in the same way.

Put the basil and the oil in the thermomix, let it go on speed 6 for 10 minutes at 80 degrees, filter with a chinua lined with absorbent paper and let it drain for 20 minutes, after which we put the basil oil in a bottle . We repeat the same procedure for coriander oil.

We place the couscous in a large container, season it with oil and a drizzle of extra virgin olive oil, pour the fish broth and let it rest for a few minutes, then with the help of our hands we peel it gently until each grain is divided. We season the couscous with flavored oils, lime juice, celery and diced peach, chopped marinated shallot.

Plating: Using a pasta bowl, place the seasoned couscous in the center of the plate, place on pieces of pan-fried red shrimp, a few slices of toast, diced celery, julienned lime and coriander and basil leaves. We pour the liquid panzanella by making a turn of the plate.