Salvias are the stars of the late season garden.

Many flowers from summer right through to the first frosts.

William Dyson is the UK’s top expert on salvias. He’s the curator of Great Comp Garden in Kent, where he also runs the award-winning Dyson’s Nurseries.

I asked him to tell me what we need to know about growing salvias.

Great Comp Garden has been called ‘one of the finest gardens to visit in Kent’. The house dates back to the 17th century and is surrounded by seven acres of garden, full of rare and interesting plants. It also has woodland walks, an Italianate garden and ‘ruins’, created as garden features. (Having visited Great Comp, I now want a ruin for my own garden.)

Great Comp Garden was created in the 20th Century by Eric and Joyce Cameron and has been open to the public (March-October only) since 1968.

Dyson’s Nurseries are based at Great Comp, and it has over 250 different salvias for sale. 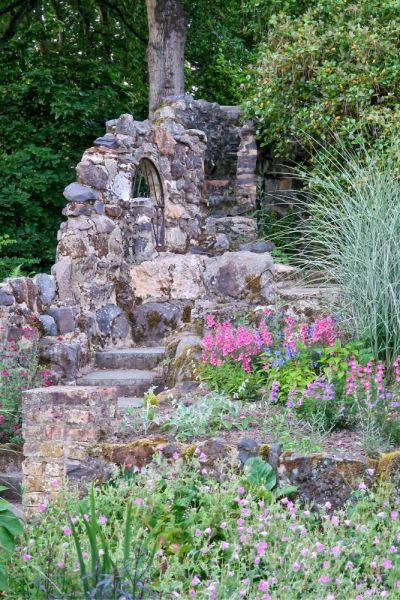 One of the ruins at Great Comp Garden, planted with salvias.

Why salvias add so much to your garden?

There are over 900 varieties of salvia. They roughly divide into hardy/half-hardy shrubs and hardy/half hardy herbaceous perennials.

A shrub is a plant with a woody stem that stays above ground all year round, while herbaceous perennials are plants that don’t have woody stems and live in your garden for three years or more. There are also a few salvias that cross over, and are described as ‘sub-shrubs’ or ‘woody perennials’.

But the amateur gardener doesn’t necessarily need to get involved in knowing which category their salvia is in, as long as they check the label for how to look after them in winter.

The main plus of salvias is that they flower for a really long time and they are very drought tolerant. William has bred a new one called Pink Pong, for example, that was in full flower when I visited at the end of June. When I went back at the end of September, three months later, Pink Pong was still a blaze of pink. And that was after the UK’s record-breaking hot dry, summer, which saw other late-flowering plants like dahlias and cannas severely knocked back. 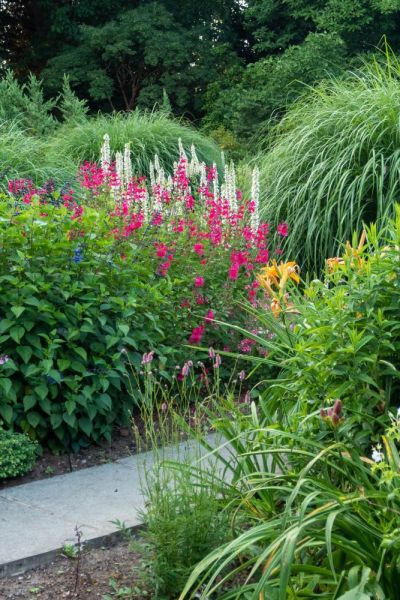 Salvia ‘Pink Pong’ at mid-summer, with ornamental grasses. When I returned three months later, it was still flowering.

William says that most salvias are hardy enough for UK winters and for US zones 8-10. But if you have cold wet winters (ie regularly below minus 15C/5F), then you’ll need to dig up your salvias and store them over winter.

Or you can simply buy new plants every spring and re-plant them every year, as if they were annuals. 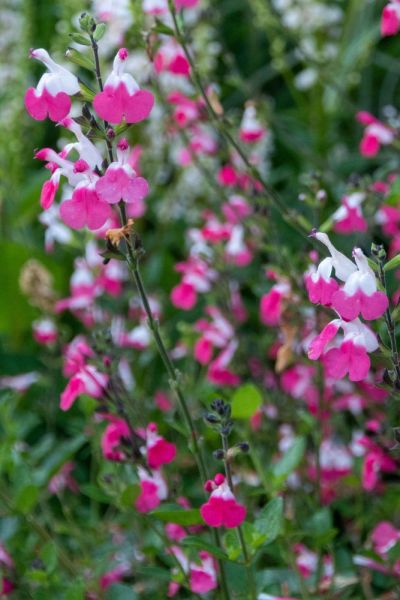 Salvia ‘Pink Lips’ is another long flowering variety and is hardy down to minus 15C/5F.

When can you plant salvias?

William advises that you plant salvias from around late spring to high summer. That’s from around the end of May to the middle of August in the UK. They need a summer in the ground to get their roots established. ‘But if you go somewhere and find a salvia you like in, say, September or October,’ says William. ‘You can buy it and keep it in a pot, then plant it out next May.’

I wish I’d had this advice when I bought some beautiful Salvia ‘Love & Wishes’, which I kept in pots over the summer, then planted out in the autumn. They didn’t survive the winter, although it was a mild one.

What plants grow well with salvias?

William likes to contrast them with ornamental grasses and he has lots of species of miscanthus at Great Comp. 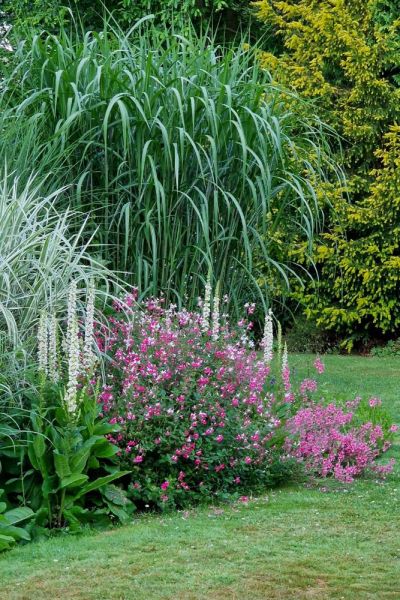 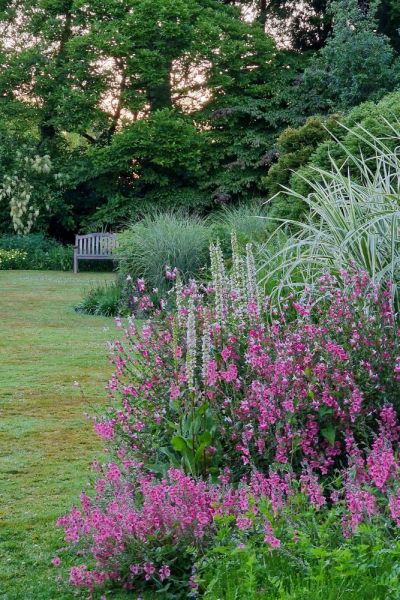 The same grouping from a different angle.

He also says that you can combine with the other flowers with a long flowering period to create color and impact. Flowers that are out when the later salvias are in flower include dahlias, fuschias and asters (now called symphyotricum). 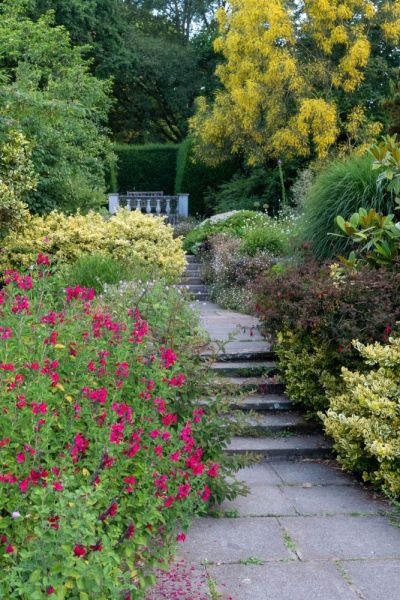 A red salvia is planted next to a red fuschia for maximum autumn colour, and there’s also beautiful contrasts in the leaf shapes and colours.

There are also salvias that flower from mid-summer onwards and these go well with verbascum and other mid-summer flowers.

William also suggests that you look at the impact of leaf contrast. You could plant a tall, large leafed salvia behind a low-growing shrubby one with smaller leaves. 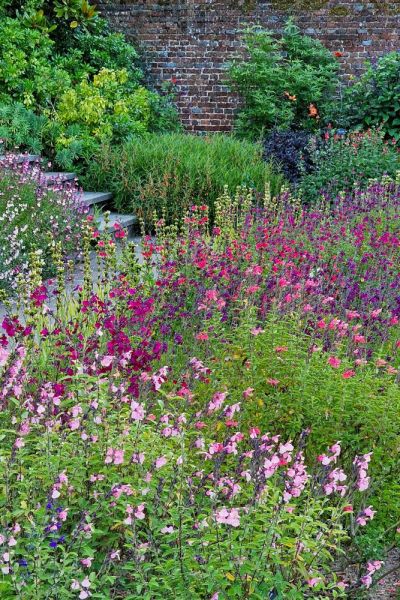 And I also saw some good leaf contrasts with other plants, such as Salvia ‘Pink Lips’ next to the dark purple leaves of Cotinus coggyria ‘Grace’.

He has also experimented with growing salvias around an apple tree, which he’s found successful. The bees and pollinators have nectar to feed on in summer and autumn, and return in spring to pollinate the apple trees.

Can you grow salvias with roses?

Plant grower and dahlia guru Sarah Raven has been experimenting with growing salvias with roses. She says that she’s noticed much less black spot and other fungal diseases on roses when the two are grown together.

William says he hasn’t tried this out, but it would certainly be a good flowering combination, because the roses bloom earlier than the salvias, which flower for longer.

Do salvias prefer sun or shade?

These are sun-loving plants, explains William. If you have a sunny spot with well drained soil, then they’ll flower from summer until the first frosts.

If you have a partially shaded area in your garden, then the big-leafed salvias are more shade tolerant than the ones with small leaves, says William. 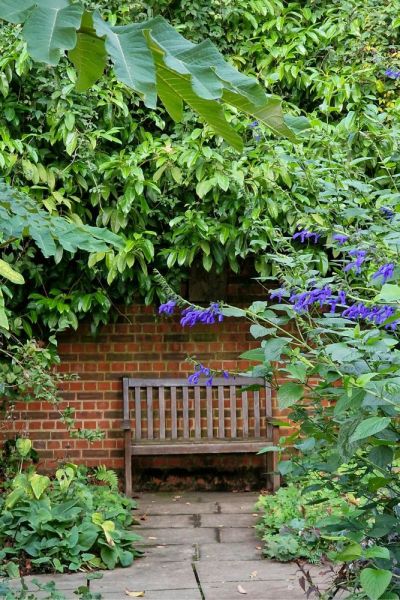 The large leafed salvia on the right is more shade tolerant than the small-leafed shrubby salvias.

Can you grow salvias in pots?

William says that salvias grow very well in pots, and there are lots of examples in Great Comp Garden. ‘We grow them in big pots and smaller ones, too. They all do very well.’ 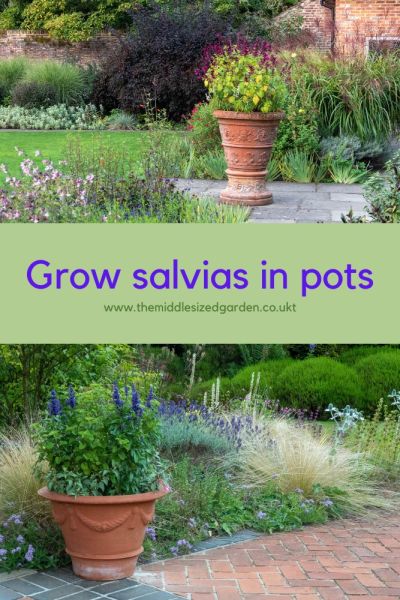 Growing salvias in pots is also a good option if you have very heavy clay soil and lots of wet weather. Salvias prefer well-drained soil. So if you’ve struggled to grow salvias in your soil, William suggests that you grow them in raised beds or pots, ‘as long as you use well drained compost.’

The only thing to remember is that they will run out of nutrition after a few months in a pot, and will need fertilising. ‘If the lower leaves turn yellow,’ he says, ‘that’s a sign that the plant is running out of food. Give them a tomato feed, and they’ll be happy.

However, don’t fertilize salvias in the ground – they’ll get all they need from the soil, says William. 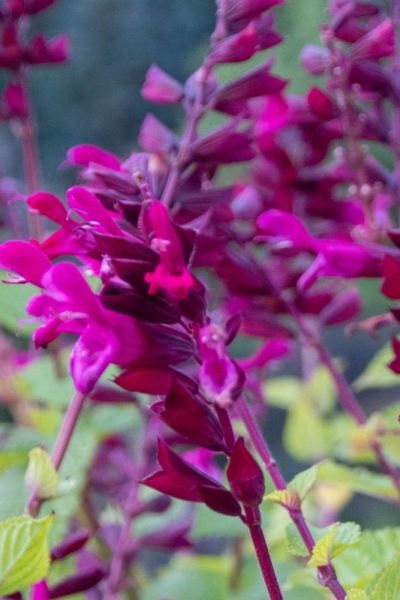 How to plum salvias

Pruning them is important, says William. You need to know whether your salvia is a shrub or a herbaceous perennial.

William cuts down the herbaceous perennial salvias to about 4″ above the ground in spring (usually around March in South East England). Then they spring back up. After that, we don’t do any more pruning or dead-heading, he says.

With the woody shrubs, he suggests cutting them back in spring to get rid of the dead growth, ‘but make sure you’ve always got some green shoots below where you’re cutting. If you don’t, the plant is likely to die.

If your shrubby salvias start flowering in May, the flower stalks will be quite long, with a single flower at its tip by around early July. At this point, William recommends that you cut the plant back by about one third, removing the whole flower stalk and some of the leaf.

This will encourage the plant to branch out, and you’ll get a better shaped plant and more flowers, which will return around 6 weeks later. Then they should go on flowering until early winter. 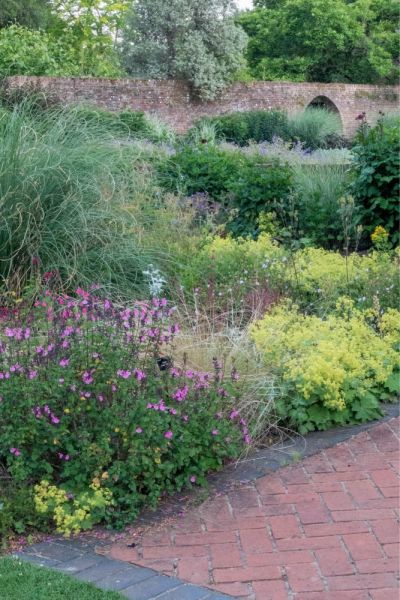 Why isn’t my salvia flowering?

If you give a salvia too much fertiliser, there’ll be lots of leafy growth at the expense of flowers. William mulches with wood chip rather than manure, for example, although he doesn’t advise mulching around the woody salvias as it may rot the woody stems.

The other main reason for non flowering is that the plant is in too shady a spot.

You can have glorious flower color from high summer through to the end of autumn by including long-flowering late season flowers. See these posts for expert tips on how to grow dahlias, hydrangeas and chrysanthemums. While many people think of chrysanthemums as ‘garage forecourt flowers’ or believe they’re difficult to grow, hardy chrysanthemums come in a stunning range of shapes and colors and are as easy as any other border plant.

You can see the full interview with William and more extended views of Great Comp garden in the video here.

Pin to remember how to grow salvias 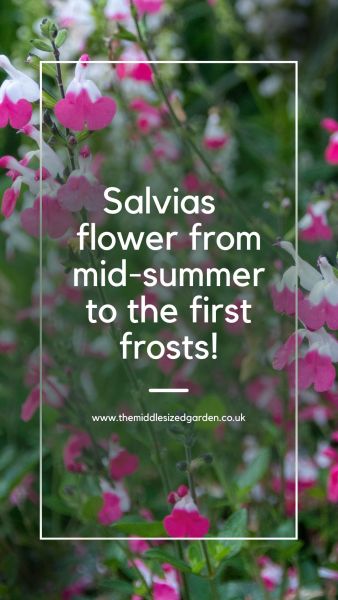