It is located one hour from Milan, in Mantello, in Lower Valtellina, which we could define as the first five-star luxury hotel for cows in Italyif not from Europe: it is there New stable of Fioridaa farm that boasts, in addition to a virtuous breeding of 220 heads of the Brown racea starred restaurant inside, The Presefheaded by chief Gianni Tarabini. Last year, the Michelin Guide added recognition of the cuisine to that of sustainability, also awarding the structure the green star. Led by CEO Alto Vanini33 years old, who inherited from his father, founder of the company, all the passion for animals, now the farm has added a new piece to its history greenon the occasion of the twentieth anniversary.

More than 20 meters of space for cows, soft sand everywhere (there are 20,593 quintals) and a system for distributing and preparing fresh meals as needed, through Vector, in addition to automatic milking, according to the physiological needs of the animals: these are just some of the features of this new project dedicated to domestic cattle, which Viola calls by name, one by one. Target? “Increase animal welfarewhich inevitably has implications for the final quality of milk and products, and therefore for the well-being of the end customer,” recalls the CEO. But how are the cows doing on one of the most advanced farms in the world? We entered the New stable of Fiorida discover.

The New stable of Fiorida: the most advanced virtuous breeding in Europe

The Vanini family: the sons Mattia and Riccardo, the founder Plinio Vanini with his wife Simonetta and Viola, CEO | Photo courtesy La Fiorida

The New stable of Fiorida it is not the only (new) project that aims at the sustainability of the historical family reality of Valtellina. “In addition to animal welfare researchwe give a speech green energy: on the roof we will put the solar panelswhich combined with the factory of biogas that we build, who will operate the farm’s manure collection, they will give us 85% energy independence, for the whole structurewhich for the moment already reduces emissions by 60%”, explains the young administrator.

In the approximately twenty hectares occupied by the farm – the only one with a starred restaurant inside in Italy – you can touch the short supply chain, indeed very short: here the zero kilometer is not only a definition of great appeal, but a tangible reality. Here then – in addition to the New stable – a greenhouse, a blueberry farm and a dairy zero meterwhere Casera dop is produced and aged, among the various cheeses. 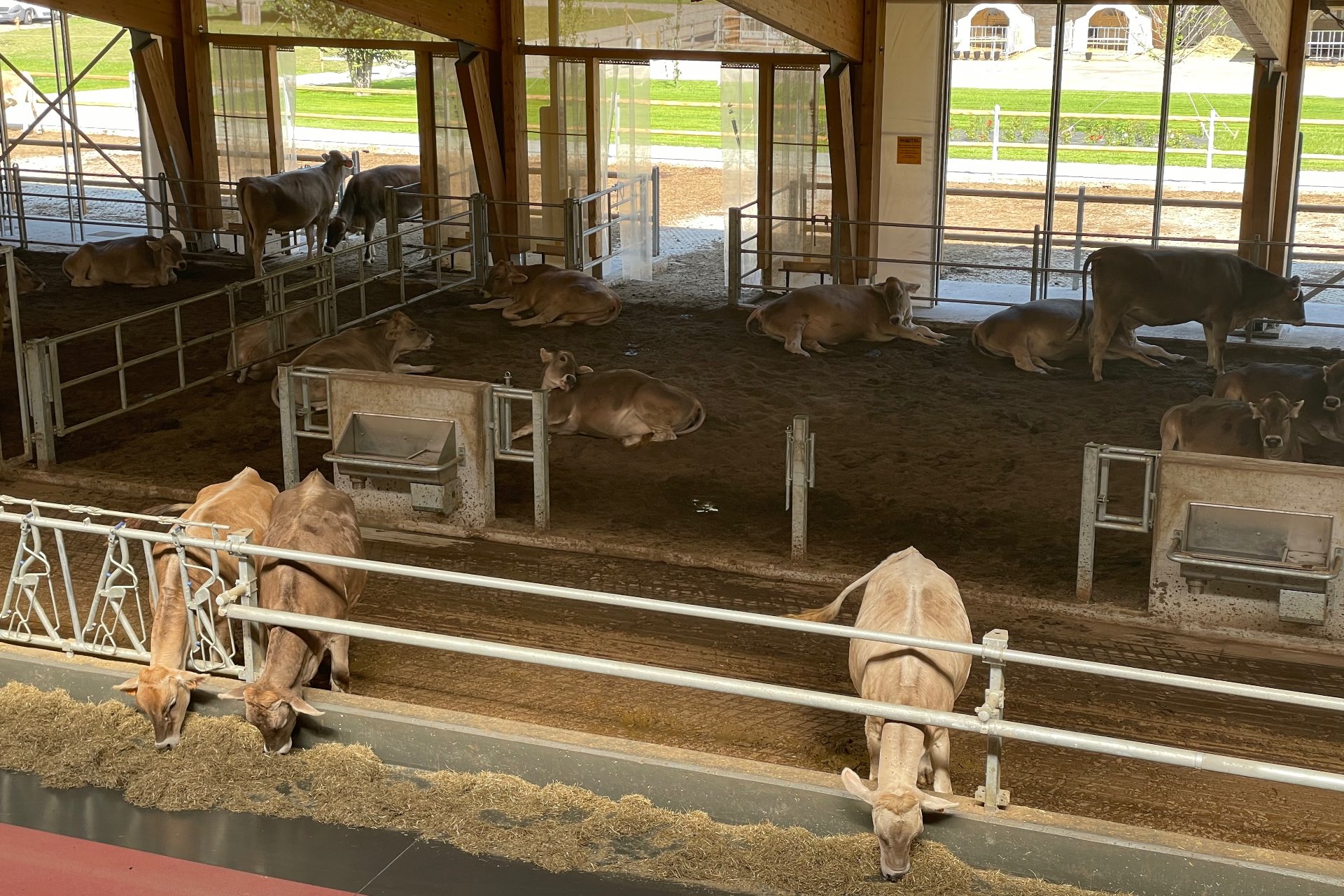 But how does the project New stable and how was it designed? “We turned to a civil architect from Valtellina, Gianmatteo Romegialli. We explained to him that we wanted a barn for the welfare of the animals, which fits well into the environment and the existing structure,” explains Viola. “We traveled the world with him, we went to Holland, to America for certain studies, but we also went to Lebanon and Italy, to study various stables. In the end, we took the best of what we saw around, putting it all together and creating an ad hoc team with veterinarians and agronomists”, he continues. “Cows now have the most correct spaces: for animal welfare, we have updated layout here 21 square meters per cowlike a studio (laughs, ed), against the 4.50 meters required by law”. 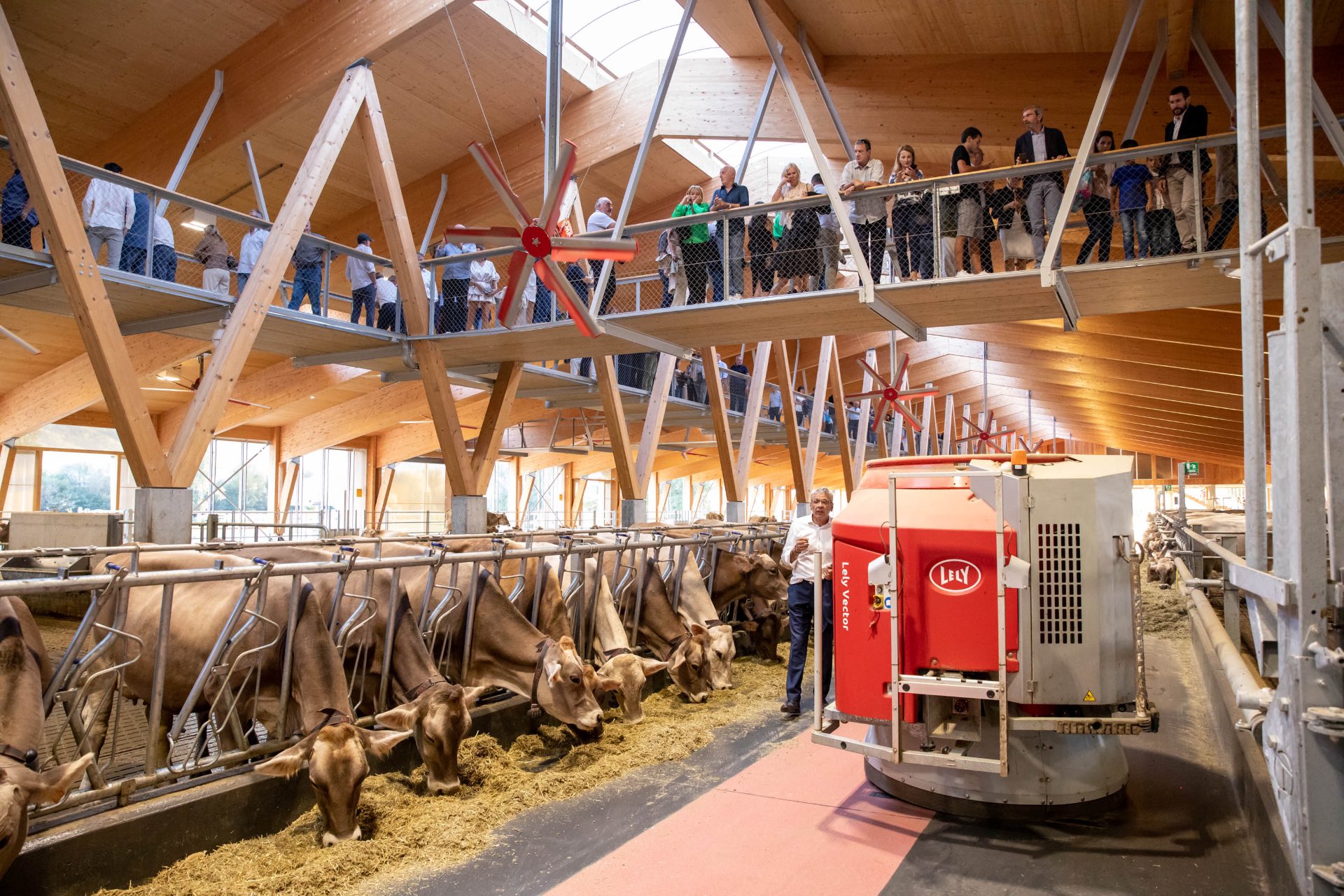 Here is a structure of 6250 square meters long 125 meters by 44.50 meters wideto be admired from above, walking on a suspended walkway, from a privileged position, while in the background music we hear classical music that relaxes and stretches the cows (and not only them). Sand is the element that characterizes spaces. “Here, the animals sleep on the sand: we have long studied what to put on the ground. Sand is present in some farms in Italy and in some farms in America, but it is perfect as a material: it occupies the earth, where the cows lie down in nature, then it is inert and does not allow bacterial proliferation, therefore fewer infections of the legs and udders, therefore less use of antibiotics: reduction of drugs in breeding and greater animal well-being”, explains Viola. A sand that hides a complex state-of-the-art liquid drainage system, which keeps the surface dry at all times. 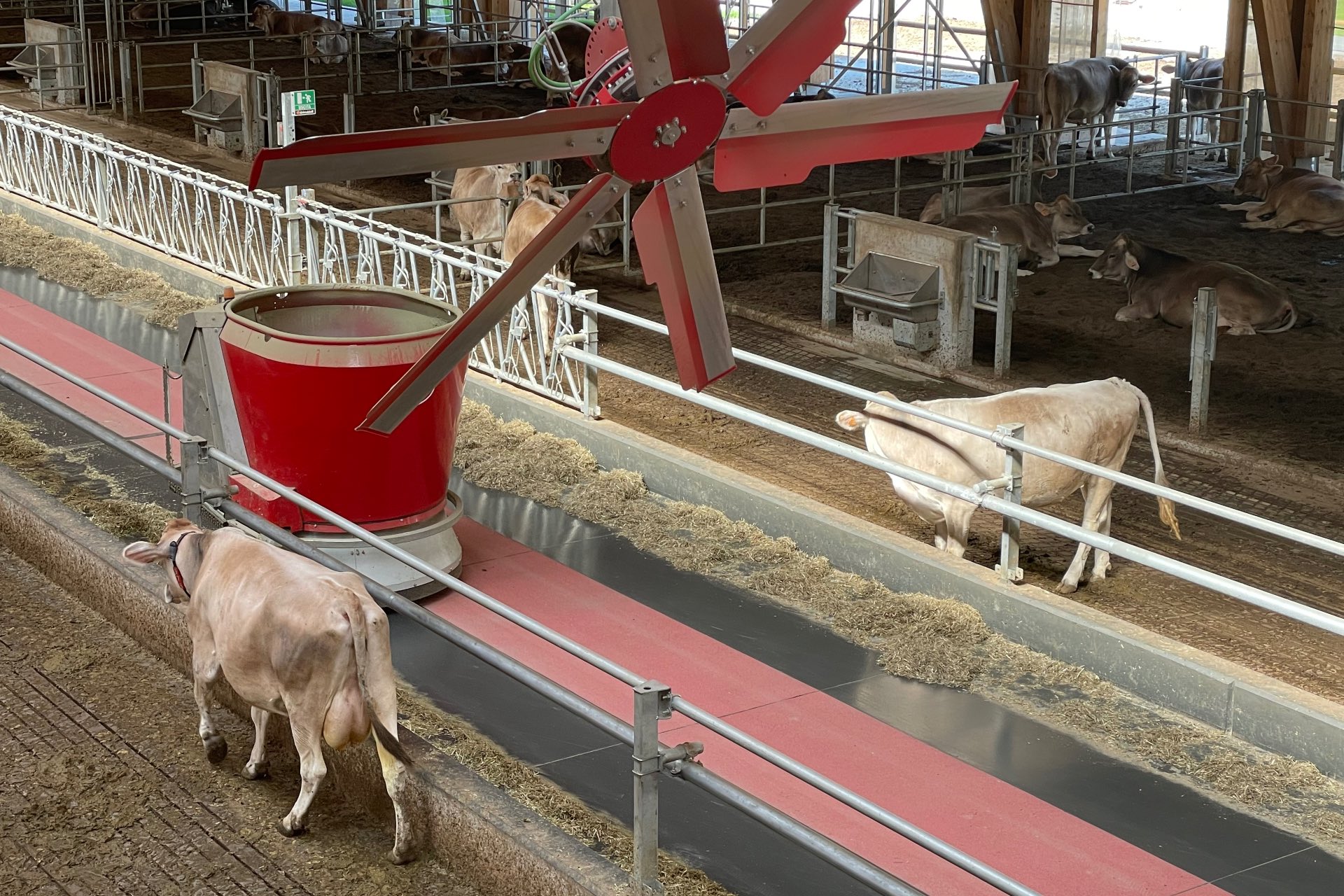 Don’t miss one ad hoc designed ventilation system: between the openings on the walls and the blades, which cool the air and ensure that all gases escape and do not remain in the barn. How do cows eat? First of all, the water is served at a controlled temperature, thanks to a circular and anti-waste system. “The water is taken from our boiler, it is waste water for the heat that burns, it arrives in the pipes and then in the drinking troughs where there is a coil which maintains the same temperatures both in summer and in winter”, explains the CEO. Among the main innovations of New stablethen there is the robotization of food preparation and distribution, several times a day. “The Vector it is as if it were a Children for the animals that are preparing fresh meals at the moment,” illustrates Viola. There is a real line in the barn: the robot weighs the quantity of each ingredient and adjusts the proportions, according to the recipe that is defined. If the robot realizes that it has taken more food than it needs, it goes back and takes everything back,” he continues. The mix is ​​made from straw, hay, chopped corn, alfalfa and rolled hay. 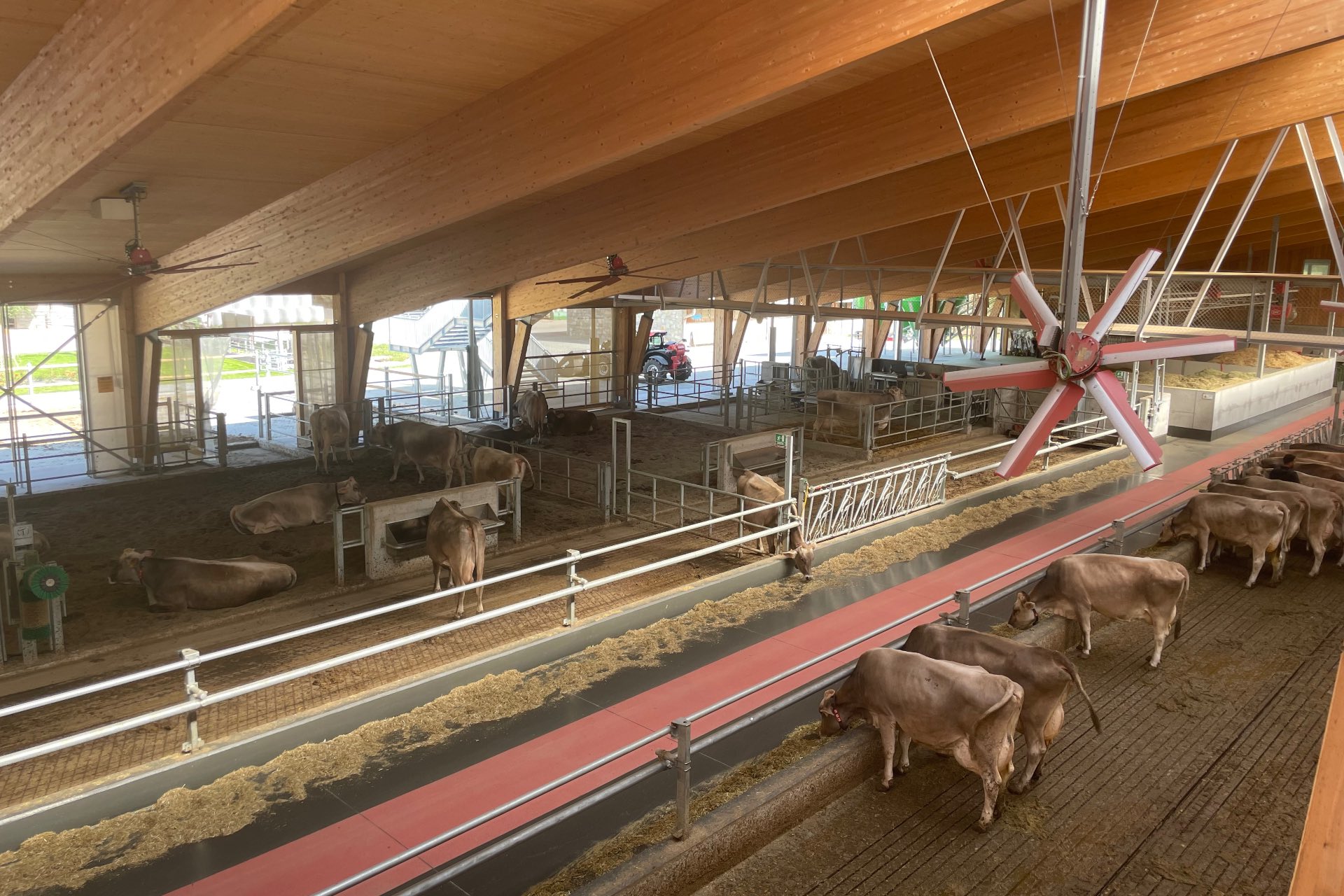 “No company has all this technology in the same structure and there are very few activities that offer such a space for the cows”, proudly explains Viola, who says he has invested a lot in this project, crowning a dream, but also paying attention to the appeals of the European Union and to the funds allocated by the RDP – Rural Development Plan.

“I can be angry, frustrated, sad, but when I enter the barn, and I’m among the cows, I feel good”, reveals the young CEO. “You really have to believe in it and do everything to be able to create something that can guarantee the well-being of everyone, of the cows and of the consumers, because their milk has proven to be better: a superior product, to which we will attribute to the restaurant starred as well as to the shop and our dairy production”. The demonstration that, even on a planet bruised by climate change and its consequences, another world is possible.