ABB’s family of cobots. From left to right, YuMi, GoFa and two-armed and one-armed SWIFTI. Together they make up a complete range for the needs of Italian manufacturing companies.

Industrial and collaborative robots also make a difference in SMEs. This is how ABB Robotics has built an ecosystem, made up of products, services, companies and trained technicians, to support those who want to embark on the digital transition.

There is a secret behind the extraordinary results achieved by the Italian manufacturing sector in 2021 and the first half of 2022, which have put our economy on a faster track than anyone else in Europe, including Germany. It is flexibility, a traditional prerogative of our companies, which has nevertheless developed a great deal in recent years, accompanied by productivity which has reached record levels in the private sector. The merit of this transformation lies above all in the introduction of digital technologies, automation and robotics, favored by state incentives which, on their own, however, are not enough. Especially for small and medium-sized companies, you need reliable interlocutors who do not limit themselves to developing reliable technologies, but who are also able to recommend the most suitable solutions and paths for each activity. 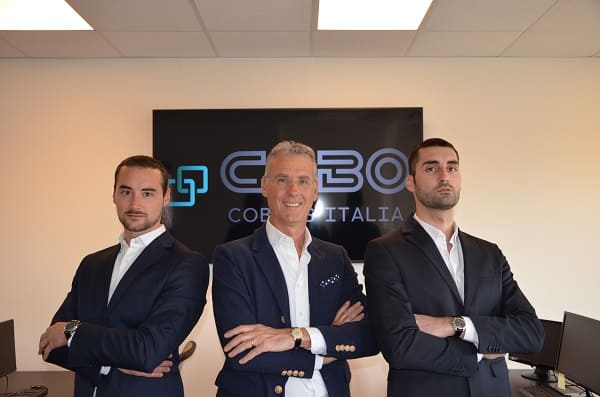 Andrea, Massimo and Filippo Missaglia of Cobo Italia, a system integrator who works closely with ABB in the design and implementation of robotic integrations.

ABB Robotics, the leading division of ABB in the development of industrial and collaborative robots, has long been equipped to provide this type of support, through a series of digital services but also through the rigorous selection of system integrators. These companies, key figures in the integration of robotic technologies into production processes, play a fundamental role of intermediation between technology producers and end users. For this reason, ABB, in developing its proposals, has not only thought of the needs of manufacturing companies, but has also developed tools that facilitate the work of system integrators by establishing a close collaborative relationship with them.

humans, for example in analytical laboratories, in the pharmaceutical industry, in cosmetics.

An example of this privileged relationship comes from Cobo Italia, a company with expertise in a wide range of application sectors. Andrea Missaglia, partner and robotics engineer, tells how the partnership with ABB Robotics was built on the example of collaborative robots. Indeed, cobots open up new possibilities for SMEs to introduce robotics into production, but they must be chosen and integrated with rationality, otherwise they risk not using them to their full potential, unfortunately not uncommon.

“Collaborative robots,” says Missaglia, “have made the path to automation more democratic. They can be integrated anywhere, are simple to program and use and have a lower cost than industrial ones. However, it should be remembered that, as flexible and practical as they are, they must be chosen according to certain criteria, installed correctly and enriched with the right ecosystem of equipment, software and skills. This is what we, integrators, do: capture the needs of the customer and transform them into projects capable of responding positively to them in terms of costs, productivity and flexibility”. 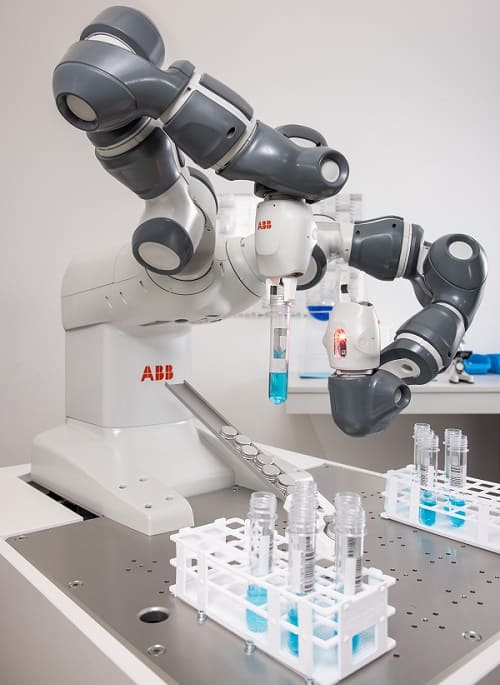 FROM PROJECT TO REALIZATION

ABB’s contribution to supporting the work of companies like Cobo is substantial. First of all, the Group has developed a particularly rich range of collaborative robots. YuMi, in the version with one or two arms, is ideal for light applications (the payload is 500 g), flexible, not necessarily fast but driven in close contact with the human operator. GoFa (also identified with the abbreviation CRB 15000) has a load capacity of 5 kg and is distinguished by its simplified programming and the possibility of sharing the working environment with humans. The SWIFTI (CRB 1100) combines the speed and performance of an industrial robot with safety features that allow it to be used even without barriers.

But besides the cobots, there is more. “Once the economic and technical feasibility has been established, we create a virtual project for the customer using software such as ABB’s RobotStudio,” adds Andrea Missaglia. “Then we start with the actual construction, which involves the use of ABB robots, accessories such as vision or gripping systems, software development and everything else necessary. The tests in our factory in Usmate Velate (MB) can last several weeks, in order to be sure to offer a tested and reliable solution. We then finish with the final installation and the training of the customer’s operators”. 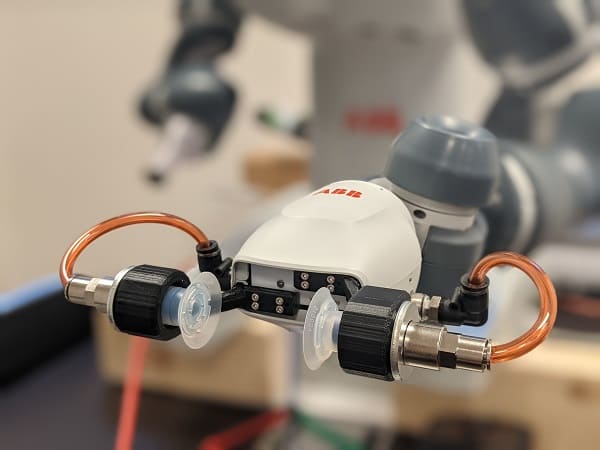 An example of a solution developed by Cobo Italia, with a gripping system for specific uses integrated into the YuMi robotic arm.

THE BENEFITS OF ACCURATE SIMULATION

Being able to work with a digital twin of a plant simplifies and speeds up the work: RobotStudio is a very powerful tool, which offers various possibilities of use, from the virtualization of the robotic line to the programming of cycles.

Wizard Easy Programming therefore allows you to develop programs based on a few simple steps, without the need to use machine code, and to program via a PC in the office without interrupting production.

“The realities with which we work are very different from each other: some have operators trained and independent in the reconfiguration of robots, while others require us to intervene when necessary. These are all services that we provide and that companies value,” adds Missaglia. 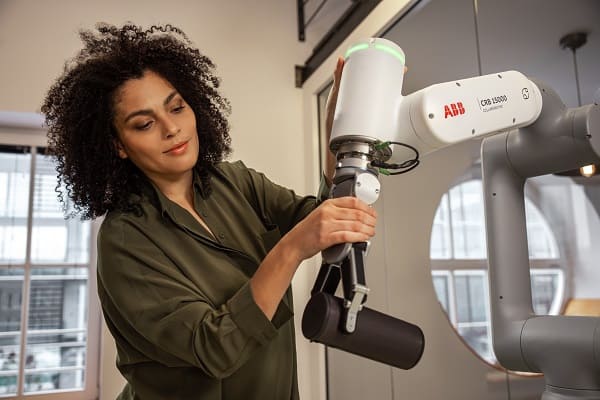 GoFa, programmable collaborative arm with manual guidance and able to support weights up to 5 kg on the wrist.

THE IMPORTANCE OF PEOPLE

ABB not only produces robots and tools, but can support system integrators with its technicians and experts, valuable people with high skills and able to understand market needs. Missaglia continues: “When we chose ABB, we did so for several reasons. Firstly because it is a structured reality, which offers high-level services and products. Then for the depth of range. But the human relationship is very important: salespeople and technicians prove to be invaluable resources for obtaining the right advice when needed”.

THE CREATOR OF ROBOTSTUDIO

The reference to ABB people is neither generic nor incidental. The company employs very valuable people, often among the best in their respective fields of expertise. Let’s think about RobotStudio. The person who made possible the development of this software, which is the most used in the world in offline programming and robotic virtualization, is Bertil Thorvaldsson, who not only devoted more than two decades of his professional life to this project but comes to be recognized by the Engelberger Awards, the most important recognition in the world in the field of robotics. Thorvaldsson has recently retired, but continues to work as a Senior Advisor to ABB and has post-graduate work at the universities of Chalmers and Skövde in his native Sweden. A real authority, but also a man rich in communication and humanity who did not hesitate to accept our request for an interview. 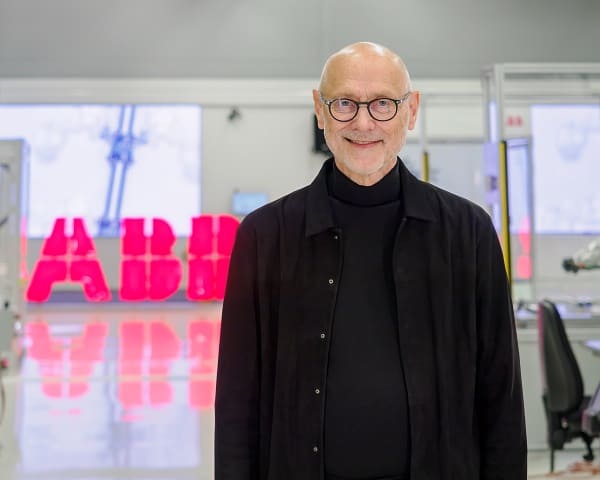 Thorvaldsson told us why using robots and RobotStudio together can really change the horizons of a small business, of which there are many in our country. “RobotStudio is a powerful tool that solves a lot of problems,” he told us. “It allows you to perform virtually and anticipate much of the work that would otherwise have to be done on the real system. It allows you to develop all the robot programming, test the system, simulate errors and arrive with all problems solved when the machine is installed at the workshop level. In other words, it allows you to reach start-up and production start-up much faster, with a huge saving of money”. In this way, too, ABB’s solutions “democratize” automation. 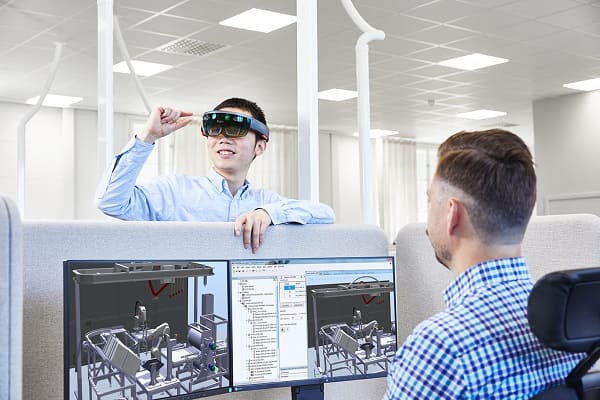 RobotStudio has been developed in a large amount of functionality, which also allows the creation of virtual twins and augmented reality applications for training and maintenance.

But who tells us that all offline simulation and virtualization work is true to reality and does not contain errors that could then be transferred to the real robotic system? “It’s the way we designed RobotStudio that makes it different from other similar systems,” says Thorvaldsson. “We developed it not on a specific operating system and particular hardware, but on a dummy operating system, which can be run on the real operating system installed on the robot control system and on the hardware used for the simulation. This way we can use the robot controller code anywhere, even on a PC with Windows. In other words, RobotStudio is not only a simulation program, it is also the real robot control software. There is only one source code, which is the same for the robot controller and for Robot Studio. In this way, what happens on the robot also happens exactly on RobotStudio and this is what happens then in reality. Without a tool like this, even tasks like virtual commissioning would be really difficult. This is where ABB’s competitive advantage over other players lies, because with Robot Studio there is a total correspondence between reality and virtuality”. © TECN’È 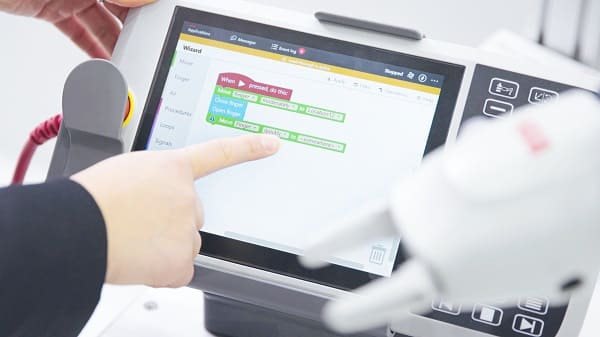 Another strength of ABB robots, which lends itself to flexible and user-friendly applications, is the block-based programming system made possible by Wizard Easy Programming.