Autumn and spring are the best time to plant perennials.

So that’s also the best time to fill gaps in your border – or even revamp your border completely.

To find out more about the best time to plant perennials and other tips for filling a gap in your border, I visited Marchants Hardy Plants to talk to Henry Macaulay.

Henry Macaulay of Marchants Hardy Plants with his tips on when to plant perennials and more good herbaceous border advice.

Marchants Hardy Plants is a top perennial nursery in Sussex. It’s unusual in that it grows all the plants on site and doesn’t import any of them. It also has a well-known garden attached, where you can see the plants in situ. The garden has appeared in many books and magazines, most recently Secret Gardens of the South East by Barbara Segall.

(Note that links to Amazon are affiliate, see disclosure) 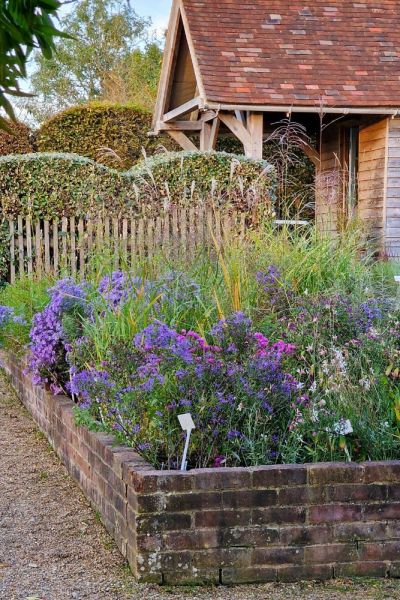 If you want to revamp your border completely or start a border from scratch, see Revamp a Border – 11 tips to turn scrappy into sensational.

Why spring and autumn are the best time to plant perennials

In winter, the ground is not only cold, but it’s often very wet. And many plants hate cold, wet soil, especially when they’re dormant. They can rot.

And in summer, plants often find it hard to get established in hot, dry weather, even if you water them.

In autumn (fall), the ground is often still warm and there is usually enough rain. So the plants have a chance to establish before winter and really get going in spring.

Spring is also a good time to plant, but if you have a very dry spring, you’ll have to water them until they get established.

And some plants need to be planted in spring

Any plant that may struggle in your winters should be planted in spring. For example, dahlias, salvias and cannas all over-winter reasonably well in my garden, but they are not fully hardy everywhere in the UK. But Henry says that if they’re not established (they’ve only just been planted), then they’re much less likely to survive a winter.

Once plants like dahlias, cannas and salvias are established, they have a good chance of surviving my winters, because we rarely go below minus 6C/21F. We rarely have snow and sometimes don’t even have many frosts. But don’t take chances with that first winter in the ground.

The same goes for some of the exotic ‘jungle’ plants. Head gardener Philip Oostenbrink has a lush, contemporary garden in South East England with big-leaved, exotic looking plants. Many are surprisingly hardy, but some, such as trachycarpus and colocasia, would probably be more likely to survive if planted in spring rather than autumn.

So when you plant perennials, check the label or name first, to see if they are ‘half-hardy’ or are particularly tender. Henry also advises that you ask the people working at the nursery for planting advice or winter care. 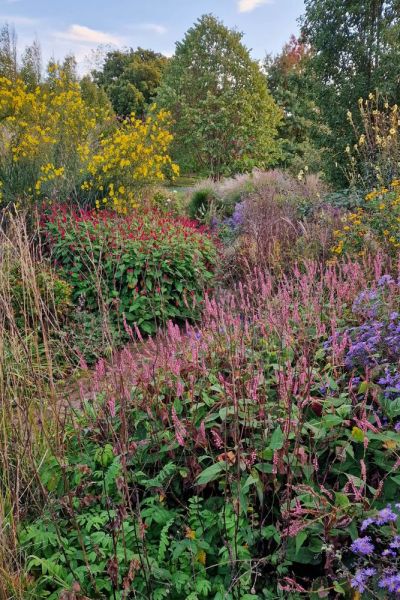 The borders at Marchants are full of persicaria, helianthus, asters and grasses for stunning late season color and texture.

Create space in a border when you plant perennials

When you plant perennials, you need to think about what competition they may have.

If you’re filling a gap in your border, you need to create more space, says Henry.

‘Plants want to survive, but if you have a weaker plant next to a stronger plant, the stronger one can take over. So you need to give every plant an equal chance of survival by giving it a good space around it.’ 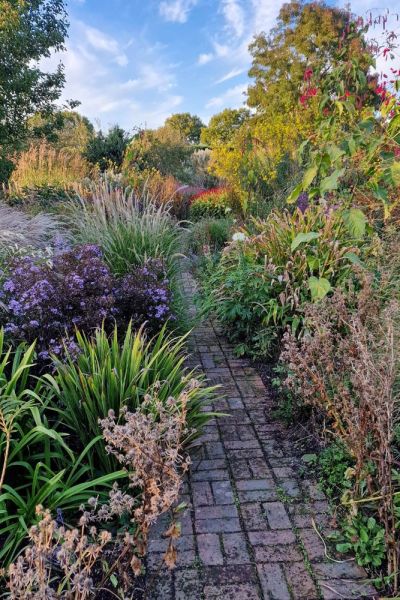 If Henry wants to fill a gap in an established border like this, he makes a good space for the plants he adds. A small plant will easily be overwhelmed.

How to choose plants to add to an existing border

When you think about adding plants to a border, Henry advises considering whether you’re looking to add contrasting color or sympathetic color.

Contrasting colors are at the opposite ends of the color wheel. See this post on garden color if you’re not familiar with the theory. Examples are blue and orange, yellow and blue or red and yellow.

Sympathetic colors are in similar tones, such as all pastels or variations on a single color, such as all reds.

For example, there’s a grouping in the Marchants garden of Fuschia ‘Thompsonii’, Salvia ‘Cerro Potosi’ and Horizontal Calico Aster. The flowers are in varying shades of pink or red, but the flower shapes are very different from each other.

‘Look for a bit of difference and drama,’ he says. 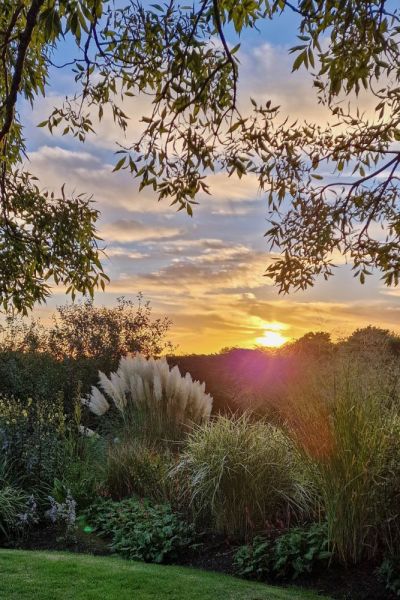 Grasses, including the much-maligned Pampas Grass, can look stunning in a late-season garden.

How to add ornamental grasses to a border

Ornamental grasses won’t add color to a border, says Henry, but they add vertical interest, movement and texture to a garden. ‘They look particularly good with broad leafed or lower plants.’

This advice ties in with what garden designer Michael McCoy said in Naturalistic Planting Design. He said that the plants around grasses need to be the height of their foliage, not their seed heads. This means that their seed heads will wave gently above the level of the plants in that part of the border.

‘In recent years, we’ve found that panicums have been the best performers, especially during a drought. They just seem to have a bit of extra resilience.’ 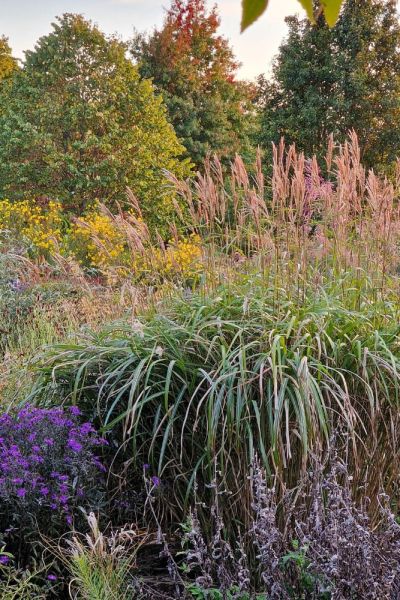 This is Miscanthus in the Marchants garden – it adds an upright presence and texture in a late-season border.

I asked Henry to recommend some top plants to consider if we’re filling a gap in our borders. ‘These days it’s hard to beat salvias,’ he says. ‘They flower for such a long time and are very drought resistant.’ For more about salvias, see this post with advice from the UK’s top salvia expert, William Dyson.

Henry also loves echinaceas. They’re also long flowering and their winter seed heads are beautifully sculptural in a winter garden. ‘But they need space,’ he says. ‘Plant them in larger groups, and give the group space.’ Echinaceas don’t do well if they’re over-crowded.

If you can’t plant perennials in autumn, what should you do?

Don’t over-water over winter, he advises. Perennials are mainly dormant in winter and they could rot if you over-water. Don’t let the pots dry out, however: ‘They shouldn’t be completely dry or completely wet.’

Check what care plants need over winter by keeping the label and looking online. And Henry says it’s always good to ask the people who work at the nursery.

And he says you need to clear a really good space, getting rid of the poor performers as well as the plants that died. ‘It’s no good tinkering around the edges,’ he says. ‘You’ve got to make an impact.’ I’m revamping my own main border at the moment, plus filling gaps in other borders. There are so many factors to consider when you’re planning to plant perennials, so I created a Border Planning Checklist. And I thought you might find it useful too, so I’ve created it as a free downloadable PDF.

This is the first time I’ve made the Border Planning Checklist public, so do let me know what you think!

Pin to remember how to plant perennials 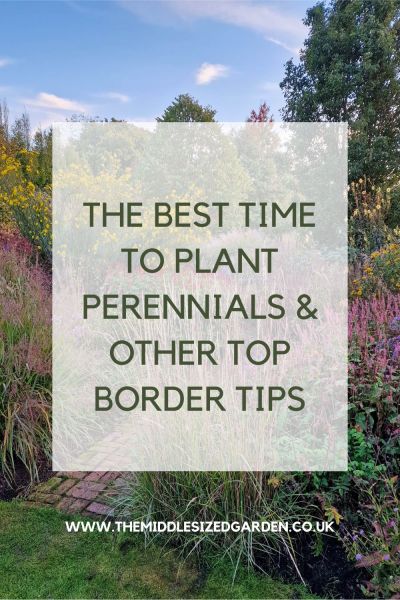